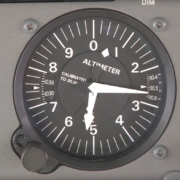 Some aviation tips are in the “commandments” category: never land with less than an hour of fuel on board, never take off over gross weight, never fly below minimums on an instrument approach. My personal favorite is, “never run out of airspeed and ideas at the same time.” Violating one of these rules means you are courting danger.

While these tips are all true, that doesn’t mean there aren’t other, smaller tips that can reduce risk. In fact, as pilots there’s a lot we can do to increase the safety margins of every flight just by keeping a few good habits.

Here are seven I try follow in the cockpit:

Set it to field elevation right away to make sure you’re not off by 1000 feet.

1. Set the altimeter to field elevation as soon as you get in the airplane. This may not be exactly correct, and you’ll want to fine tune the setting before takeoff (via ATIS or AWOS), but getting the altimeter in the ballpark is a good hedge against making a 1,000-foot error. This can happen if the barometric pressure has changed dramatically since your last flight. I once set the altimeter for -500 feet, thinking it was actually at 500 feet (the correct altitude). This habit gives you two chances to catch any errors, and takes just a few seconds.

2. Set the heading bug on the runway you are using for takeoff. Many airplanes have a heading bug these days, which is used to control the autopilot. But that bug can be used as a valuable reminder, even if you aren’t using automation. Especially at an airport with multiple runways, I always set the bug on the runway heading that I’ll be using. It’s a quick reminder during taxi, and a valuable last minute check before you take off. In larger airplanes, it could even prevent a fatal mistake, like the CRJ crash in Lexington, Kentucky, some years ago.

3. Don’t reconfigure on the runway. As you gain confidence in the airplane, it’s tempting to multi-task. Sometimes that’s OK, but resist the urge to do it after landing, while you’re still on the runway. Leave the flaps where they are, don’t touch the trim, and don’t worry about the lights. They can all wait, and if your attention is in the cockpit, you might miss a serious traffic conflict or even taxi the airplane into the grass. Keep the cockpit sterile until you’re over the hold-short line. Obviously an exception can be made for touch and goes, but I’d only do this with an instructor in the right seat (never solo).

Don’t grab that flap handle without first making sure it’s the right one.

4. Verify the flap handle in retractable gear airplanes. Somewhat related to the previous habit, in retractable airplanes it’s easy to mix up the flap and gear handles, particularly if you’re in a hurry. Sure, there are systems to prevent the retraction of the gear when you’re on the ground, but those can fail. Take two extra seconds when you grab the flap handle to retract them after landing, and say (out loud), “I have the flap handle.” It may seem silly at first, but it can prevent a very expensive mistake.

5. Use a quick flow check at key moments. Every pilot and every airplane will have a different flow check, but a good one includes essential items like: power setting, trim, flaps/gear, engine instruments, and altitude. This can take just a moment, but I like to do it shortly after takeoff, at the top of climb, before starting descent and just before landing. It’s not a replacement for a printed checklist, but a good backup to make sure the critical checklist steps have been completed.

6. Leave the landing light out until cleared for takeoff. At towered airports, you’ll sometimes be cleared to “line up and wait,” meaning you’ll take the runway but hold your position until you get additional clearance from the tower. To avoid confusion, I always leave the landing light off until I have received clearance to take off. That gives me a quick check if I’m ever uncertain of my status. And yes, you should always turn on the landing light for takeoff, even during the daytime. It’s helpful for collision avoidance.

7. Call out “1000 to go” in climbs and descents. The pros always say this, and most newer autopilots also do it too. When you’re within 1000 feet of your level-off altitude, say “1000 to go” and maybe even hold up one finger. It’s a good way to prevent an altitude bust (a big deal in the world of IFR flying), but it’s also a helpful reminder that you should be focusing on flying the airplane, not talking to passengers or programming the avionics.

All of these are easy and quick, so they shouldn’t burden your typical flight. In fact, after a while, you probably won’t even notice you’re doing them. In my 3000+ hours of flying, all seven have saved me from a mistake. Sure, not all would have been fatal or even serious, but striving for that mistake-free flight is every pilot’s goal. I’ll take all the help I can get.