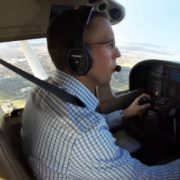 Being a student pilot is a lot like being an 8th grader: sometimes you just want to fit in. Since I learned to fly at a towered airport, I was especially worried about being a bad teammate: making a mistake on the radio, breaking some unwritten rule or upsetting air traffic control (ATC). Whenever possible, I wanted to say yes and fit into the flow.

I suspect most pilots are the same way. After all, we are typically the can-do type who view “no” as a sign of weakness. But as much as we like to press the push-to-talk button and calmly proclaim “wilco,” sometimes you simply have to say no – even when it’s uncomfortable. It’s not being lazy or being a bad pilot, it’s prioritizing safety over convenience.

Here are 8 times it’s not just advisable but required to say no:

You can tell him no – he’ll forgive you.

Say no to a takeoff clearance if you’re not ready. “Cessna 12345, cleared for immediate takeoff, traffic on 1 mile final.” It happens all the time at busy airports, but this scenario is packed with subtle pressure to start moving – now. Resist the urge to rush. No matter how much you want to help out, you’re not doing your job as pilot in command if you take off before you’re ready. In fact, the deadliest accident in aviation history can ultimately be blamed on a 747 taking off before both pilots were ready.

Say no to “max forward speed” on final if you can’t safely do it. If there’s a Learjet or a Boeing behind you for the runway, you may hear ATC ask you to fly as fast as you can on final in order to keep the spacing acceptable for him. If you have 500 hours in the airplane and can do it, by all means, comply with the request and make everyone’s life easier. But if you’re on your first solo cross country, you’re under no obligation to accept this request – and it is a request. You might have to turn off final or do a 360, but that’s better than arriving at the threshold high, fast and unstabilized.

Say no to land and hold short if you’re unsure. So-called LAHSO operations are pretty rare these days, but you might get issued this instruction at a bigger airport with intersecting runways. If you’re not absolutely certain you can land and hold short of the crossing runway, and if you haven’t previously studied the chart and briefed the procedure, don’t say yes. Sure, the controller may not be happy, but he’ll be a whole lot less happy if you accept but can’t do it.

If you don’t have the airport in sight on a hazy day, don’t lie.

Say no to an approach clearance if you’re not stabilized. For instrument pilots, the start of an approach is a critical time: the airplane is descending towards terrain and obstacles without visual reference. If you’re not certain of your position – and if the airplane isn’t configured and slowed down properly – accepting an approach clearance and chasing the needles will not make things better. Ask for a delay vector and go back out to re-intercept the final approach course. Good landings are the result of good approaches, so insist on starting them the right way.

Say no to a crossing restriction you can’t make. Another concern for IFR pilots, and occasionally VFR pilots, is when ATC asks you to pass a certain waypoint at or below a certain altitude. Often this is a simple clearance to comply with, but sometimes ATC asks for the impossible. If you do the math (hint: your GPS’s VNAV function saves a lot of time) and find out you’ll need to maintain 2000 ft/min down, you probably need to let ATC know it’s not possible. This isn’t the end of the world – just be honest and let them come up with a plan B.

Say no to a more experienced pilot when you’re uncomfortable. Not all pressure comes from ATC; sometimes other pilots are guilty too. Years ago, as a brand new Private Pilot, I was staring intently at the weather maps at the airport as I tried to figure out a way to fly home. A much more experienced pilot, in an effort to be helpful, leaned over my shoulder and gave some advice: “looks worse than it really is – I think you’ll be fine.” I ended up taking off, but I shouldn’t have. I had let the older pilot’s opinion influence me, substituting his personal minimums for mine. Never again. Your decision is your decision, and sometimes that means politely thanking another pilot and saying no to yourself.

Say no to pushy passengers if the weather is marginal. Passengers can also offer their opinion, even if you don’t want it. This is tricky, especially with friends and family, since we love to show off our piloting skills and “get the job done.” But general aviation flying is supposed to be fun, and if the weather doesn’t look fun it’s your job as PIC to say no. It may be disappointing, but it’s the right call – no matter who the passenger is.

Fitting in is a good thing most of the time and there’s no virtue in being a nuisance, so use your PIC authority wisely. But if you’re ever unsure or uncomfortable, you have every right to say no. In fact, most good controllers will tell you that they expect it.