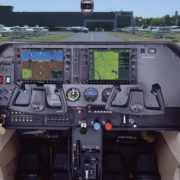 As Christmas approaches once again, I can’t help but think back to an earlier holiday and a flying experience that I had with two of my favorite passengers; my two daughters.  They were a bit younger when this occurred but it is still a great flying memory and one that I’m excited to retell.

On that Christmas holiday, my wife, the girls, and I drove to see family as I am sure that many of you did and will do again as well.  When my wife and I departed for home on December 26th, we left our girls to stay for a few extra days with their granny.

It wasn’t long until it was time to retrieve the kids.  Decision time, just under four hours roundtrip on the road or just over an hour in a Cessna 172…since I am writing about it now, I am sure your can guess the choice that I made.

I took an afternoon vacation from work to get the girls.  Sporty’s Academy’s G1000 equipped Cessna 172 Skyhawk was my airplane of choice for the trip.

The weather forecasts had been calling for greater than 6 miles visibility with an overcast layer of clouds at around 2000 feet above the ground.  The temperatures looked like they would be warm enough to climb through the clouds if necessary but my plan was to enjoy the view afforded by a visual flight rules trip.

As the time for my departure approached, the forecasts were amended to show a later development of the overcast clouds.

As I performed my preflight inspection of N12064, the visibility looked great and only a few high cirrus clouds were visible.  Winds were relatively light and it was shaping up to be a great day to fly.

After departing runway 22 at Clermont County/Sporty’s Airport and climbing clear of the traffic pattern, I turned the 172 to the north-northwest.  The G1000 told me it would take 25 minutes to reach the Municipal Airport in Richmond, Indiana, where I would meet my mother and my girls.

Snow covered the ground and I knew from my preflight that Richmond’s north-south oriented runway was closed.  As I approached the airport and had some trouble seeing the landmark runway, I realized that the closure was due to it being covered in snow.  As I entered a left downwind for runway 24, Richmond’s other big runway, I surveyed the airport’s plowing status.  Runway 6-24 was clean as were the taxiways at each end of the runway that led to the nicely plowed main ramp.  The midfield taxiway had not been plowed.

After clearing the runway at the end, I started the longer than normal taxi to the ramp and the reasons for my trip.

As I climbed out of the airplane and started walking toward the fence, I could see the excitement on the faces of my waiting passengers.

Through the Eyes of a Child

After a short break to visit with Mom, the girls said their goodbyes and climbed into the airplane.  They had decided amongst themselves that the younger would join Dad up front for the flight home.

Perched up on their booster cushions, they put on their child-size Sigtronics headsets as I put on my similar adult size set.

After our departure on runway 24, the intercom chatter about the sights began.

“Wow, look at all of the snow!  It is everywhere!” came the exclamations shortly after takeoff.

“There is a ‘V’ in the snow over there,” indicated the younger.  “It looks more like a ‘Y’,” corrected the older (2 years age difference makes her the teacher).

We leveled off at 2,500 feet for the trip back to Batavia.  This put us about 1,500 feet above the ground and around 500 feet below the clouds that had decided to show up.

“The roads are shaped like rectangles.”  “Look at how small that car is.”  “That house is in the middle of nowhere.  So is that one, and that one,” the commentary continued.

As we proceeded toward our destination, the discussion of the sights on the ground began to dissipate.  The older daughter pulled out her new Nintendo DS as MP3 player supplied music filtered through the intercom system.  The younger daughter started asking questions about the G1000 and wondered why I wasn’t touching the controls.  I explained some of the features found on the map and pointed out the KAP 140 autopilot that was currently maintaining our altitude.

“How soon until we get there?” came the query.  I pointed out the estimated time en route to her on the multifunction display.

I looked at my watch and commented, “If I had driven up to get you, I would just be getting to Granny’s house.  Now, we are almost home.”

Our landing back at the Clermont County/Sporty’s Airport was uneventful after we joined 4 other airplanes in the traffic pattern.  We exited the runway at midfield (all of our taxiways were clear of snow though wet from nearby melting snow banks).  We taxied to the maintenance hangar; N12064 was due for an oil change.  I helped our maintenance crew pull the airplane into the hangar as the girls giggled about the extra ride.

A little while later, we arrived at the older daughter’s basketball practice, which she likely would have missed if we had been ground bound that day.

As we sat and watched the dribbling and the shooting, my younger daughter noted, “I am glad that you are a pilot, Dad.  If you weren’t a pilot, we wouldn’t have gotten to fly today.”