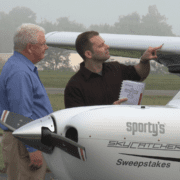 I’ve never liked the pre-flight inspection. It’s like the salad course before a steak dinner–sure, it’s good for you, but all it does is prevent you from getting to the good stuff. I can still remember my very first lesson as a 15-year old, desperate to get up in the air. But instead of blasting off like Tom Cruise, my instructor took me out and walked me through a brutal, 15-minute inspection of the airplane. Like I cared about an exhaust manifold? I wanted to fly!

If I could go back and give the 15-year old me some advice, it would be short and sweet: “Get over it.” While no one dreams of becoming a pilot so they can sump fuel, the pre-flight inspection is a critical safety habit for all pilots. If 20,000 hour airline pilots do it before every flight, we mere mortals should probably do it too.

That doesn’t mean I spend 20 minutes before every flight, checklist in hand, opening up the cowl on the airplane. My pre-flight routine has evolved as I’ve gained experienced and transitioned into new airplanes. But I try to follow a ritual every time I fly, and I try to approach it with seriousness.

Every pilot’s checklist will probably be different for a pre-flight, but here are some general tips that have served me well:

Do you like the pre-flight, or just tolerate it? Have any tips to add? Share your comments below.