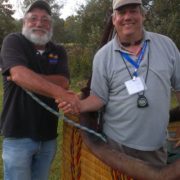 Here at Sporty’s Academy, we love to celebrate the achievements of our students.  One of our biggest celebrations comes when a student successfully completes his or her first solo.  We really think that this is a big deal and we want the student to understand this as well!

It has been many years since my first solo in an airplane.  In fact, I’ll be celebrating the 30th anniversary of that event in a couple of years.  Even with the intervening years, I can still remember my takeoff from Runway 29 at the Flagler County Airport in Florida.  I don’t really remember the landing but I remember the takeoff.  I looked out the side window after liftoff, watched the left main spin to a stop, and thought to myself, “Well, now you have to land it!”

Since that day, I’ve had other “firsts” in aviation that have meant a lot to me.  My first time flying in the clouds, my first time flying a light twin and feeling like I was about a mile behind the airplane on downwind, the first time taking my parents and grandmother flying, first flights for nieces and nephews (and my brother becoming unnerved when I banked the airplane with him and his kids), the first flight with the wonderful woman who would later become my wife, and of course the very special first flights with each of my own children.

There have also been other “first” solos for me in new aircraft and new aircraft categories and classes.  This past week, I had another first solo and it was in one of the most different aircraft that I have ever flown.

All Alone in a Hot Air Balloon

A couple of years ago, I wrote a blog post about the beginning of my hot air balloon training.  I was excited for the new challenge and was finding this completely different way of flying both difficult but rewarding.  Flying a hot air balloon is much more weather dependent than flying an airplane and Ohio hasn’t been terribly cooperative since I began my training.  Between the weather and a series of other delaying factors, suffice to say that the training has been slow.  My instructors have made valiant efforts to get me scheduled but other events have not cooperated well.

In September we were finally able to string together a series of flights and on October 1st, 2014, my instructor had me land, stepped out of the basket, and sent me on my way; my first solo flight in a hot air balloon.

As I began to climb up to a safe altitude with only me in the basket, the thought from my first airplane solo returned to me, “Well, now you have to land it!”

Charlie, my instructor, had told me to fly for about 20 minutes then find a place to land.  That was my plan; it took a little longer.

The wind was considered light and variable that day but the track the wind was taking me was generally to the south/southwest.  A mile or so ahead I spied a private airport that I knew to be in very good condition and that would make an excellent landing location and that became my goal.  My track was in that general direction so I thought that I had a shot.  At first, the variation in the winds was taking me to the right of my goal but soon they came back to the left.  As I descended for the landing, the winds trended further to the left and I missed my target.

I initiated a climb once again to look for a new location as I passed Charlie and my chase crew in a parking lot across the road from the private runway.

I tried for a nice big front yard but the variable winds decided to push me toward powerlines this time. I initiated another go-around.  You just don’t mess with powerlines, ever!!

Next I saw Charlie and my crew sitting beside a nice large field but the left turn that had pushed me away from the airport on my first attempt and toward the powerlines on the second, decided to change directions and become a right turn.  I needed the left to land there so my search continued.

I climbed back up as I saw some high tension lines ahead and wanted to give them sufficient clearance.

After passing these lines, I allowed the balloon to descend as I was now over a soy bean field and sunset was only about 20 minutes away.  As a balloon pilot, you generally want to avoid landing in crops as it tends to upset the farmers but if you have to you have to.  I didn’t have to.  I kept the basket approximately 5-10 feet above the crops and slowly allowed the wind to work me over to the edge of the field.  As I neared a treeline at the edge of the field, I found a spot of tall grass and weeds and set the balloon down without damaging myself, the balloon, or the crops.

Charlie and my crew were near my location and helped me move the balloon to a very nice yard on the other side of a fence for the congratulatory photos and packing up the balloon.  The landowners were excited to see us and my first balloon solo concluded with daylight to spare.

Thanks to my instructors Charlie & Charlie (Sr. & Jr.) for getting me this far in my training and to all of my chase crews that have been there to pick us up when we landed.  Special thanks to Charlie Sr. for soloing me and to Anthony for driving the chase vehicle that evening (and for taking the post solo picture and the picture above prior to the high tension lines).

If anyone ever tells you that flying a hot air balloon is easy, I’d say they have never actually flown one.  Get out there and enjoy your flight training, celebrate your achievements, and take a bit of time to brag about your first solo even if it is your second or third one!