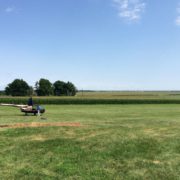 We all set goals as pilots, whether it’s completing the first solo, earning a private pilot certificate or simply getting current again. There’s nothing wrong with that (in fact, I think it’s part of what makes flying so rewarding), but we need to be careful that the destination doesn’t overshadow the journey.

I was reminded of this timeless lesson recently, and all it took was a grass runway and a trailer…

This summer I took part in the annual pilgrimage to Oshkosh, Wisconsin for the AirVenture fly-in. Like many pilots, the flight to Oshkosh is the highlight of my year—a chance to make a fun cross-country flight, to meet new friends and to see what’s happening in aviation. It should be on every pilot’s to-do list.

My plan was to fly from the Cincinnati, Ohio area to Oshkosh via helicopter, and I’d be traveling with a friend and fellow helicopter pilot. We were hoping to make Oshkosh before dark, so we set out for our intended fuel stop in the Chicago area around mid-day. Mother Nature didn’t get the memo about our plan, though, and we quickly ran into pretty serious headwinds. We were still faster than the cars on the highway, but not by much.

As your flight instructor has probably mentioned, stronger than forecast headwinds should immediately set off alarms about fuel planning, and they did for us. Chicago now looked unreachable, so we began the search for an alternate fuel stop—a task made very easy by modern iPad apps and panel-mount GPSs. After considering a few options, I remembered a small airport in northwestern Indiana that I had almost landed at before. It has the distinction of being one of the few public airports in America with an instrument approach to a grass runway.

Since I have a real affection for grass runways in the country, we headed for this new goal: Lowell Airport (C97). The iPad said they had fuel, but a call on Unicom didn’t raise anyone. With a shrug, we flew on and soon landed, trying to hover as close to the self-serve fuel pumps as we could get. It was time to get fuel and keep heading for Oshkosh—after all, we had a schedule to keep and the winds were not helping.

The only problem? Those self-serve fuel pumps weren’t very self-serve. With no sign of a credit card reader anywhere, we walked up the hill to the “FBO,” which was really just a trailer by the parking lot. No one answered our knock, and after walking in the open door, it immediately became apparent that no one was at this airport.

I had already made one bad decision by not planning my alternate airports better and not verifying that fuel was available. Now the temptation was strong to make another bad decision and fly to the next closest airport to find fuel. But after double-checking my fuel burn math and the fuel gauges (at my personal minimums), I made the call that we were staying put—one way or another, we were getting fuel at Lowell.

We eventually found a phone number inside and got an airport employee to agree to come fuel us, but we were told it would be half an hour before he could make it. My initial reaction was impatience and frustration: could we still make Oshkosh when we wanted to?

But then, as if the aviation gods were speaking to us, I stopped to look around. Here we were, two aviation enthusiasts, “stranded” at a beautiful airport on a sunny day—grass runway, taildraggers parked in the shade, corn fields waving in the wind. This was an opportunity to reconnect with what we all love about flying, not to complain.

I had been so focused on hitting our schedule that I had forgotten why we were flying in the first place. The whole point of Oshkosh is getting there, not checking something off your to-do list. And what better way to soak up aviation than to spend some time at a throwback airport like this?

So with a newfound patience and an open mind, I wandered around the airport to admire the surroundings. When help finally did arrive, we found the man to be an absolute delight. After mentioning that they don’t accept credit cards, he casually offered that we could send a check in the mail when we got back from Oshkosh. “I trust you guys,” said this complete stranger. Try that move at your local BP station!

After initially hurrying to get in and out of Lowell, we were now reluctant to leave a place that seemed to embody so much that is right about general aviation. We made it to Oshkosh just fine, but I spent the rest of the trip a lot less worried about details and a lot more focused on being in the moment. In the end, this speed bump turned out to be a much-needed wakeup call for me.

It’s a reminder that, whether you’re struggling with crosswind landings or trying to master VOR navigation, flying is not about written tests and checkrides. Checking off goals is great, but being a pilot is really about mastering a challenging task, becoming a better person and (most importantly) enjoying the ride.

So next time you find yourself focusing too much on your aviation goals, stop and smell the avgas.