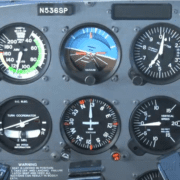 We had six planes in all. Taking off from Clermont County Airport (I69), the destination was only 15 minutes away.  We were going to Blue Ash Airport to have the “Last Supper” as we called it.  You see, Blue Ash was closing and we wanted to land there one last time before “they” closed it.  There was a restaurant within walking distance of the parking area, so the food became a must.

I hopped in the left seat of a Cessna Skyhawk.  To my right was a recreational pilot who was close to his private license who came along for the ride.  On takeoff, I could tell something wasn’t quite right.  It took almost half of the 3500 ft runway to build up speed for rotation. Vr in this plane is 55 kts.   Around midfield, at an indicated speed of approximately 48 kts, the plane leaps into the air.  It took a lot of nose down trim to keep the plane at Vy (79 kts).

Odd, yes., but given the young apprentice sitting next to me and the short duration of the flight, I thought nothing of it.  I was confident and certainly didn’t want to seem worried so I was able to convince myself that all was normal.

On the way to Blue Ash, I notice a maximum cruise speed of 94 kts.  This plane would normally do 110kts.  Did I leave my flaps down again (story for another time)?  Is something broken?  Everything looked and felt fine, except for my airspeed.

Let’s pause the story and hit the rewind button to four months prior.  I was fortunate enough to represent Sporty`s Pilot Shop at a trade show in Alaska.  While I was there a bush pilot told me a story about when he took a 30,000 hour commercial pilot on a fishing trip in a Super Cub.  During takeoff, he gets up to speed and rotates.  The commercial pilot starts panicking and shouting “Airspeed! Airspeed! Your airspeed indicator isn’t working.”  His response to this: “What`s an airspeed indicator?”

The commercial pilot`s entire flying career was based on trusting his gauges, where the Bush Pilot flew largely by feel.  I could hear Bob Hoover in the background saying,  “The plane doesn’t know the engines aren’t running.”

Back at Blue Ash, I`ve made it to final approach.  It just so happened that the traffic in the pattern was using runway 24, meaning we had a 6 knot tailwind.  I thought nothing of it for an experienced pilot like me.  To make matters worse, Rwy 24 is a right-hand pattern.  I have special hatred for right-hand patterns.  I always end up high and fast.  So on final, my airspeed indication is getting slow.  I`m at final approach speed, but screaming down final as if I requested permission for a fly by.

With five planes behind me watching, I flared and flew a third of the way down the runway before forcing the plane to touch down. After a couple of bounces and porpoises, I was beyond midfield and not even in the ballpark of having the weight transferred from the wings to the wheels.

Luckily, this big, bad, macho pilot (me) has very little pride when it comes to going around. With five planes in the pattern, I announced my go around.  Hitting the throttle, pulling up flaps, still trusting the airspeed indicator, I climb out again with a lot of nose down trim to keep the airspeed at Vy.

The windsock at the end of the runway confirms that we had a tailwind, but not a huge one.  Glancing over at the ground peed on the GPS, it says I`m doing 90 kts while the airspeed is indicating 65 kts.  A choir of angels sings, the light bulb goes on, the fog lifts from the valley.  Looking back, I should have figured this out on takeoff, but my macho man attitude and instrument mentality had led me astray.  Remembering my bush pilot friend from Alaska, I flew the next approach based on what felt right with a couple of groundspeed call outs from the pilot sitting next to me (the verification step).  We made it down with no further issues and enjoyed our final trip to Blue Ash.

All the symptoms were there but I chose to ignore them.  The pitot tube had a partial blockage leading to a false reading, much lower than normal.  My mind was too busy showing this rookie how we real pilots fly.

Moral of the story:  If it doesn’t feel right, it probably isn’t.  Trust, but verify your gauges.  A simple cross check of the groundspeed indication on the GPS would have revealed the issue and I could have made the adjustment before I attempted a landing.