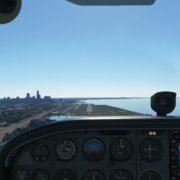 At home flight simulators can be a fun way to pass time while getting some sense of flight and training benefit, especially when using a complete system equipped with yoke, throttle quadrant, and rudders. Can’t be too much different from the real thing, right? Well, yes – but also, no. I’m always a bit cautious when a prospective student expresses overconfidence from his time flying a home simulator or appears to be an expert before the first lesson. While the benefits of simulation used in the right way are many, not everything can be effectively replicated and I’m a firm believer in “there’s nothing like the real thing.” Let’s discuss the pros and cons of home simulation.

Flight simulators can familiarize a student with some basics of flying, which can give a leg-up over others who have never seen the inside of an airplane. This is especially beneficial if the student will be using an airplane in the flight sim that is equipped the same as the airplanes they may be flying. Some flight simulators, such as X Plane, are very detailed to use the same systems and “buttonology” as their real-life counterparts, like the Garmin navigators. They can also help to understand instrument indications and how they work and what exactly they’re providing a pilot.

Procedurally, simulators can be helpful for a student who struggles with checklists, instrument scans, or even something as simple as pattern work. By utilizing a checklist while flying in a simulator, a student can become familiar with a flow (specific sequence of accomplishing checklist items), whether a start-up checklist, landing checklist, or even emergency checklist. A positive feature on many simulators is you can choose to fail various components of an airplane and can practice recovery procedures or how to react in an emergency situation. If a new student is struggling with traffic patterns and pattern radio calls, the simulator is a good way to practice without being concerned about what other pilots are thinking. There are even add-ons in many simulators to speak with live ATC controllers to familiarize pilots with ATC communications which many new private students find difficult. (Don’t get cocky though, some sim controllers may put you in the penalty box at LGA if you mess up too badly).They can also be helpful if you’re concerned about a flight to an unfamiliar airport as the simulator environment would allow you to fly the route and pattern at an airport to gain familiarity and set accurate expectations.

The pure enjoyment and challenge of using a sim can be magical. Want to see if you have what it takes to virtually fly an F18 through a valley? There’s a challenge built into FS2020 that allows you to do this. Think you can land a 747 on Saba? Give it a shot – it’s difficult. This is where the gaming side of flight sim comes into play as it give you the opportunity to preform unrealistic or even dangerous things that are impossible in real life.

Even the change of pace can be a nice break from the monotony of flight training and local maneuver-based flying. Having a change of pace from training while still doing something aviation related can open the eyes of a student and remind them of why they’re getting into aviation and the endless opportunities aviation provides. Flight sims do not perfectly represent flying. Even the large simulators that are used for type rating training aren’t perfect, let alone an at-home simulator. The feeling of flight is one of the biggest differences between most simulators and actually flying an airplane. The G forces from acceleration, stalls, turning, etc. can cause some students additional stresses or even sickness, leading to a swift return to the airport. Even full motion simulators can only slightly represent these feelings.

Being in an airplane is a totally different environment than sitting at home in front of your computer. A small 172 or anything similar used for training can be a cramped space with no air conditioning (unless you’re lucky and train in an SR22) and heat that has two settings, off or as hot as an oven. Attempting to fly an airplane in potentially uncomfortable situations while maintaining contact with air traffic control or listening into a traffic pattern all while messing with avionics while also getting tossed around by turbulence can be overwhelming. And one that’s not effectively represented by a flight simulator.

Something that can throw off many sim pilots is just how different the controls of an airplane feel versus the simulator. Controls in many simulators are light and typically not adjustable, nor do they change as aerodynamic forces change.  In airplanes, the controls will become heavier the faster an airplane is moving. Fancy simulators may have force feedback options which somewhat resemble the increasing pressure as speed increases, but even then it may not match perfectly.

And landings? For a private pilot trying to learn how to fly, it’s very important that they also learn the process to stop flying safely. Simulators are not good for teaching landings. There’s many reasons for this, including control feedback, sight picture, sound, etc. It’s important to understand how an airplane feels during slow flight, especially when performing a round out and flare. The controls begin to take more input to get the same response as what they may get at higher speeds and feel more sluggish. Your sight picture will be much different in a sim versus in an actual airplane due to different head (or view in the sim) positions and is a much smaller view on a screen, leading to some runway illusion. The different sounds that an airplane makes while coming in for landing, rather it be the stall horn or simply the air flowing over the airplane will not be the same between the two platforms.  Whenever crosswind comes into play, there’s a lot of feeling and sight picture that plays into a proper crosswind landing technique that’s difficult to recreate in a sim.

Is a simulator valuable for flight training? The answer is it depends on your goals. Procedures, instrument flight, cockpit or route familiarization, and pure fun are certainly things that a flight simulator can help a student with. However, actually learning how to fly an airplane comes down to the tried and true method – fly an airplane. A simulator cannot teach you a lot of different pieces of flying and it’s also not a real instructor. If you want to truly succeed in aviation, get in contact with a local flight school or instructor and begin taking lessons. You’ll be surprised by how different it can be versus a simulator. Oh, and don’t tell them that you know it all because your a home sim pilot.