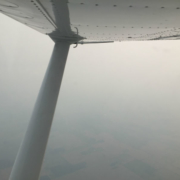 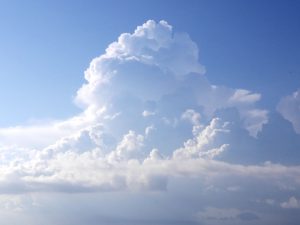 July 27, 1980. I was lying on the wet ramp at the Morgantown, WV (KMGW), airport in front of the Flight Service Station (FSS). I was flat on my back, my clothes soaking up the ponded water. Peering up through the then-sprinkling rain, I noticed a small crowd of interested observers asking if I was all right.

My thoughts went back 24 days earlier to July 3, the day I passed my private check ride. Darrell, my designated pilot examiner, was typing up my temporary Private Pilot Certificate. As he handed it to me he said, “It’s not only a license to fly; it is a license to learn.”

I thought I knew what he meant as I began my first really long cross-country flight from Rochester, MN, to Flemingsburg, KY. I was working in Rochester for Babcock Swine, Inc. At Babcock, we sold breeding hogs to farmers throughout the United States and Canada. I was in the technical services department. My job included helping our customers select replacement females and moving them into the breeding herd. I won’t go into all the details, but if you’ve ever seen animal husbandry episodes with Mike Rowe on Dirty Jobs, you may develop a good idea of some of the process.

I couldn’t afford to buy an airplane so I had joined the Southeast Minnesota Flying Club. A well-run flying club is a great way to economically and conveniently access a variety of aircraft. At the time this club had a Cessna 150 (in which I took my check ride), a 182, and a 172.

I needed to visit some customers in southern Pennsylvania. I had checked out the eighteen year-old 172, N159AE, for my extended weeklong trip on Friday, July 25.  My plan was to fly from Rochester (KRST) to Fleming – Mason Airport (KFGX) to spend the weekend with my parents. Then I would move on to my clients in Pennsylvania. After visiting the Rochester FSS (yes, there were a lot of Flight Service Stations back in those days) for my weather briefing, I was ready to launch.

The weather was clear to my fuel stop in Danville, Illinois (KDNV). That is when I found out we only know the weather at reporting locations—which at that time were towered airports, National Weather Service stations, and the FSSs. Al Gore had not yet invented the internet nor were there remote AWOS/ASOS stations. A layer of clouds near the Polo (PLL) VOR (nope, no GPS back then either) forced me to finish most of that leg less than 3,000 above the ground. 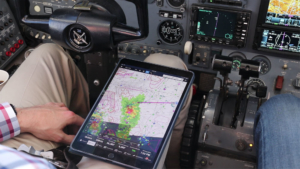 Lesson 1: I determined from this experience weather is as forecast only part of the time. Sometimes it may be better, but other times it will be worse so assume forecasts are more like opinions than facts. “This is what license to learn means,” I thought to myself as I was bumping along in the warm summer air. No, the big lesson was yet to come.

My mother was a worrier. I knew if she knew I was learning to fly she would worry about every lesson. So I hadn’t told her or Dad. At Danville, I phoned the house. “Can y’all come pick me up at the airport?” I asked.

“Are you coming into Cincinnati or Lexington?” she asked.

“No, the airport just 5 miles from your house on the Maysville Road,” was my reply.

“How are you getting there?”

“I’m flying myself in a Cessna 172,” I answered.  I could tell by the silence on the phone that the reality was sinking in.

“John [my dad] and I will come and pick you up,” she finally replied.

I had a delightful weekend on the farm with my family and planned on heading to Capital City Airport (KCXY) in Harrisburg, PA, Sunday afternoon. I looked up the Flight Service Station number in the phone book (for all you too young to have ever replaced a phonograph needle, before smart phones and the internet, we relied on these paper publications called phone books to look up numbers) and gave them a call. “Generally marginal VFR conditions exist across your route of flight with five to seven miles visibility and ceilings from 3,000 to 5,000 feet,” stated the briefer. “VFR flight is not recommended.”

VFR not recommended? What did he mean? After all, I was a Private Pilot with 75 hours. I knew the rules. All I needed was a 1,000 foot ceiling and three miles visibility to fly VFR. This forecast was for ceilings at least three times higher and twice the visibility. I determined I could easily make my flight to Harrisburg. 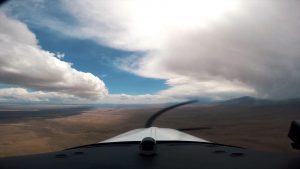 Departing Fleming – Mason, I tuned in the York (YRK) VOR and I was on my way. The Ohio Valley in late July is usually hot and muggy. This day was no exception. There were some high clouds but mostly it was just hazy. “This must be what five miles of visibility looks like,” I thought to myself. I now know it was more like 10.

Rochester is located on the plains. Canadian air masses usually dominate. Normally the air is clear and you can see any rain coming for many miles. For the most part, the terrain is as flat as a day old beer and cell towers had not been invented yet. The truth was, although I knew I could legally fly VFR with 1,000 foot ceilings and three miles visibility, I hadn’t flown in any weather even approaching those legal numbers.

Now in the haze over West Virginia, I was feeling my way up the Ohio River Valley in visibility so low I could not distinguish the horizon. Whereas Minnesota was flat, the mountains of West Virginia were, well, mountainous. I had the uneasy combination of the ceilings above me getting lower and the ground below me getting higher.

Lesson 3: In the battle between mountains and airplanes, no matter how mighty the airplane and how meager the mountain, the mountain always wins.

Of course I had no autopilot and without the natural horizon, I was having some difficulty holding heading and altitude. After crossing the Parkersburg VOR (JPU) I set my course for Morgantown, where I would gladly take a break for gas and a restroom.

On the ground in Morgantown, I stepped into the FSS. In 1980, all those charts you study for the FAA knowledge test were affixed to bulletin boards on the wall—no computer terminals with weather in motion to study. Area forecasts came in on teletype machines while the latest composite radar was faxed in once per hour or so. The latest of these reports, probably an hour old, depicted rain (likely thundershowers) west of my route. I decided I needed to get on my way or I would have to stay in Morgantown, and I had an appointment outside of Harrisburg the following morning. The pigs were calling.

Lesson 4: The only place you have to be is where you are.

I departed Morgantown for the Indian Head VOR (IHD),  only 34 miles northeast. I wanted to climb to 5,500 feet but the clouds stopped my climb around 5,000.  A quick look at the sectional told me the highest terrain in this sector was 3,600 feet so I felt good about that, though a bit uneasy about the topography below me. The haze was thickening, the visibility was going down, and then the haze turned into rain—a hard rain. I could see the wing tips. I could see the ground straight down. The RPM began to drop and the engine started running rough. Now I’m sure there are some mighty nice people living in that part of the country but for some reason, the theme from the movie Deliverance started going through my mind. 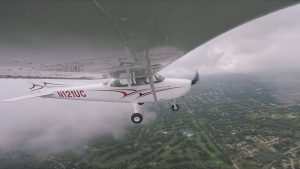 All of a sudden, the training kicked in: full throttle, full carburetor heat, initiate a 180-degree turn back towards Morgantown only about 15 minutes away. Fortunately for me, the rain was mostly staying to my west off the right wing. I flew over a small airport near Farmington, WV. It looked inviting, but vacant. Being mission-oriented, I was still thinking about getting to the pig farm the next morning so I pressed on. Once at the MGW VOR, I turned northwest.

“Morgantown Tower, Skyhawk 159AE over the VOR, inbound for landing”

“Niner Alpha Echo, we have a thunderstorm in progress,” was the reply from the tower.

Just then, I saw the end of a runway protruding out of a wall of rain. “Tower, I see a runway! Request permission to land,” I broadcast as I turned the plane for the numbers.

“Niner Alpha Echo, cleared to land—runway and direction your choice.”

Within a couple of minutes I landed and rolled into another hard rain shower. I stopped the plane on the runway and radioed the tower for taxi instructions.

“Niner Alpha Echo, we can’t see you, state your position.”

“Niner Alpha Echo, hold your position, turn on your lights, we’ll send someone to find you.”

The rain ended as abruptly as it began. A maintenance truck approached with a flashing amber light on top and I followed it to the ramp. I shut down the airplane and opened the door. My left foot slipped off the landing gear and I rolled out of the airplane onto the ramp where this story began.

Lesson 6: No matter how bleak things appear, keep flying the airplane until all the parts quit moving. If it looks bad, don’t give up, fly as far into the wreck as possible. Things may just turn out better than you feared.

That night I caught a US Airways Beech 1900 from Morgantown to Pittsburgh, then on to Harrisburg. I rented a car and drove to the farms I intended to visit. I flew back on a 1900 to Morgantown, where the visibility was fine but the ceiling was less than 1,000 feet. In 1980, they actually went outside once an hour with a helium balloon, released it, and then timed how long it took the clouds to swallow it. Once the observation was made, it would be another hour until the next one.

Finally, the next day, the clouds parted and I headed back to Rochester. Once past the hills of southeastern Ohio, I was again over the familiar flat terrain of the midwestern farming country. I stopped to check weather at the FSS in Zanesville, OH, and Rockford, IL: severe clear, ceiling and visibility unlimited was the report at both stations. Of course, it started raining on me as I was taxiing to the hangar at Rochester (refer back to lesson 1).

During your training, tell your instructor you want to experience marginal weather. Give them a call next time visibility is near three miles. You may be surprised just how little visibility that really is and there are a lot more antennas today than back in 1980. If the aircraft does not have a panel-mounted GPS, buy yourself a portable ADS-B receiver to go along with your iPad. In addition to your position, they also provide weather and multitudes of other information.

Since that first long cross country, it has been my goal to make the subsequent ones as boring as possible. Take advantage of the lessons I have learned and feel free to leave a comment to share your own with the rest of us. And remember the words of my DPE thirty years ago: “It’s not only a license to fly; it is a license to learn.”