The last two years have witnessed a flurry of interest in the flight simulation realm, thanks mainly to Microsoft Flight Simulator 2020. With Bing Maps providing a detailed view of the entire world, most digital pilots first jumped in a Cessna 172 and flew over their digital homes (while being stuck in them). Multiple programmers, hardware manufacturers, and flight sim personalities took advantage of the fresh interest. Now two years later we’re still seeing new hardware, software, and events for the typical home simulator. Here are three upcoming flight sim stories we at Sporty’s are excited about. 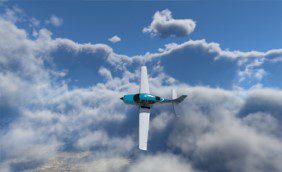 Laminar Research released X-Plane version 1.00 in 1995 when names like IBM, Packard Bell, and Compaq were the go-to platforms for a home PC. Twenty one years later, in November of 2016, the 11th iteration of the program was released to the public and is the supported version available today. X-Plane 11 is a great program for anyone committed to accurate instrumentation within the digital aircraft, and is a phenomenal simulator for instrument training, proficiency, or basic understanding. Laminar’s program prioritizes what happens / is presented inside the aircraft, whereas other programs may focus on what happens outside the aircraft.

In the recent months information has trickled out from the Laminar’s development team updating the public on version 12 of the simulator program. With new aircraft entering the digital fleet (SR22, Citation X, R22, RV-10, plus more) and impressive updates to the flight model, improved weather engines, and a world scenery overhaul, we are very excited for the upcoming X-Plane 12 program and all that it will offer to the aviation community. 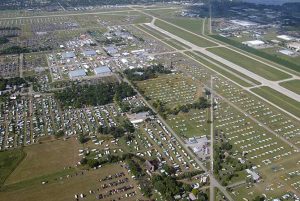 I’ve personally attended AirVenture up in Oshkosh, Wisconsin, almost a dozen times, both as an attendee and an exhibitor. I have to admit that I’ve never been at the controls flying into the busiest airport in the world (for one week) and I have to admit I plan to prep a little bit when the time comes. Watch any YouTube video covering how busy the area gets and you’ll recognize the need for making sure your VFR comms and situational awareness are at peak performance.

A great method for practicing the busy Fisk Arrival is with SimVenture presented by PilotEdge, two weeks before the main event. From Thursday, July 14th, through Sunday, July 17th, you can fly the unusual approach from the convenience of your home while communicating with actual tower controllers who will be running the show two weeks later. This is a great event for a pilot making their inaugural approach to AirVenture, a rusty pilot who wants to build some confidence before heading to Oshkosh, or for the simulator enthusiast who is looking forward to their next challenge!

To watch the trailer for 2022’s event click here. To register for a webinar outlining the event and covering what’s needed to participate, click here. 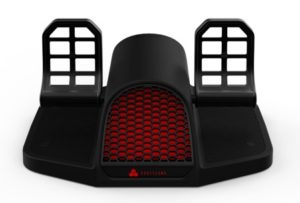 It’s no surprise that Honeycomb decided to expand into the rudder pedals portion of flight simulation hardware and add the third leg to the impressive Honeycomb Flight Simulator components stool. The Charlie Rudder Pedals (by most accounts) are still six months out from shipping to customers, but information drops have started. A common issue with simulator pedals is that they consistently slide on a floor when in use. Honeycomb worked around this problem by offering a sturdy base that includes large rubber grip pads that can be interchanged with included carpet spikes. The pedals are made of alloy metal and have adjustable foot resting angles to get closer to your desired configuration. Lastly, the Honeycomb Charlie features an adjustable tension knob that allows the user to set the pedals up for a Cessna 172 one flight and a Boeing 787 the next. Sporty’s Flight Sim department looks forward to the Charlie Rudder Pedals joining the Honeycomb Alpha and Bravo that are predominantly configured with the flight simulator PC here at the airport.

The world of Flight Simulation is extensive and wide reaching. With all the products and services that have become available in the last few years, you’re almost certain to find the right hardware or software to mimic your preferred bird. What’s exciting is there’s more on the horizon, and we hope that never changes.