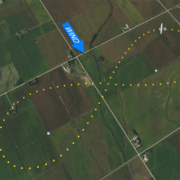 There are several new flight maneuvers to learn during Commercial Pilot Training. One of the new ground reference maneuvers is called Eights on Pylons, which involves flying a figure 8 pattern over the ground while varying the aircraft’s altitude in order to maintain a defined visual reference to preselected reference points, called pivot points, or pylons.