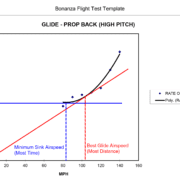 As a student pilot, before you even solo, your flight instructor will teach you the basic concept behind a speed known as Best Glide Speed. You will likely be taught that this is a speed that will allow you to cover the most distance in gliding flight. This basic concept will probably follow you through your Private Pilot certificate.

As expressed by many instructors and examiners, your Private Pilot certificate is a license to learn. Now that you have reached this milestone, it is time to go beyond the basics. 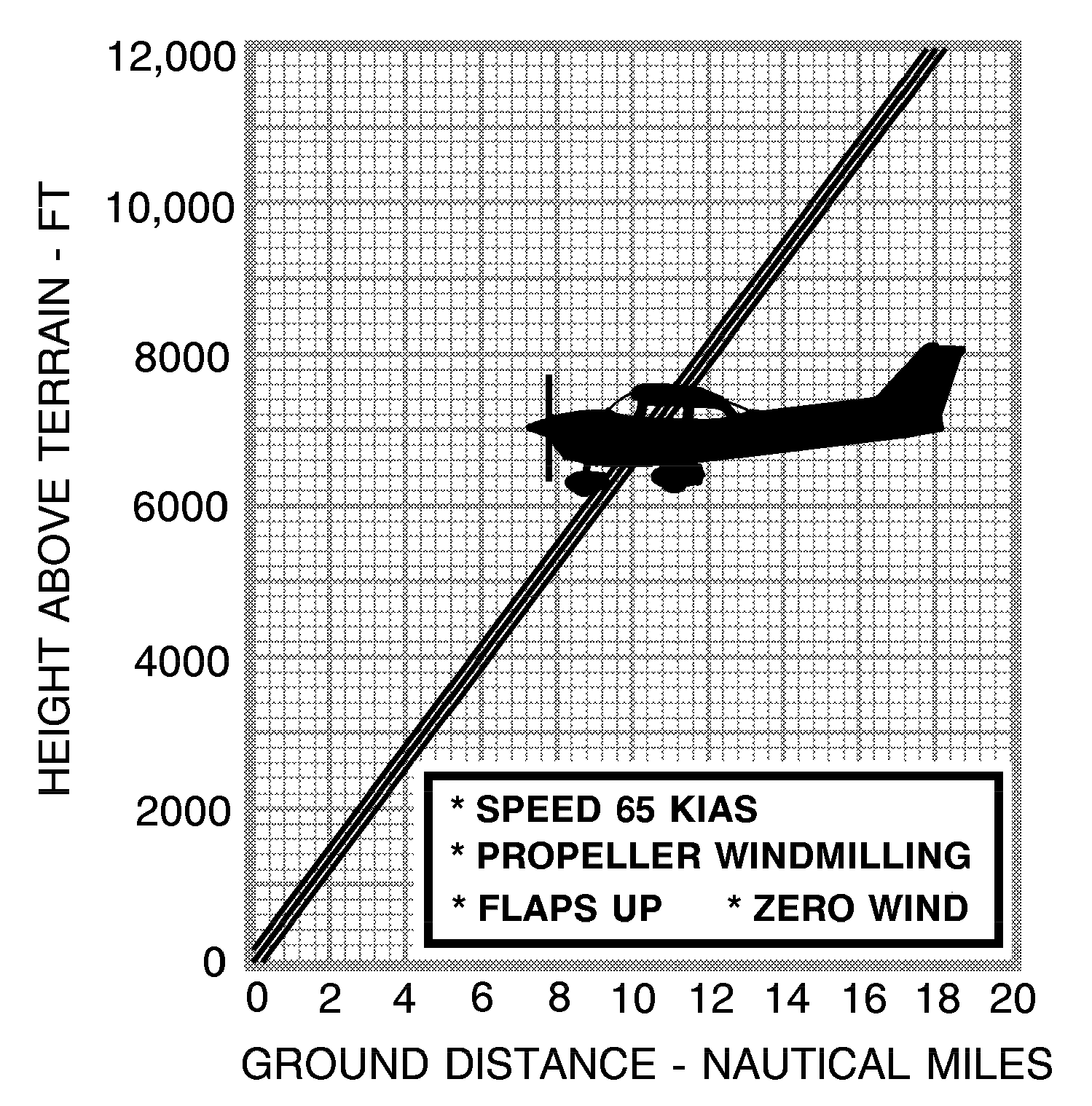 There are certainly some advantages to keeping Best Glide airspeed simple. First, in an emergency when you would typically use this speed, your first priority is always to fly the airplane. Your priority is performing as safe a landing under the most favorable conditions available. You may not have a lot of time to remind yourself how the value of this airspeed can change while also seeking a place to land and managing the emergency. In addition to this, you may not have all of the variables readily available to make a rapid calculation in this situation.

One simple situation that you should consider in an emergency is whether your typical Best Glide airspeed, which will give you maximum distance in a no wind situation, is the correct speed to use. If you have already arrived over your preferred landing point and you would like more time for troubleshooting, consider using a Minimum Sink Airspeed.

Minimum Sink speed is not a value that you will find in your typical airplane flight manual. It is a very common value to find in a glider flight manual. It is the speed which will provide your lowest descent rate and the most amount of time in the air. It is a speed that will be found slightly slower than the Best Glide speed that you learned from your flight instructor. There are ways to calculate it but we’ll keep it simple and call it slower than Best Glide with a good margin of safety over the stall speed.

Getting the Most Performance Out of Best Glide Speeds

When you are ready to move beyond the “basic” concept, there is quite a bit of information available that can take you deeper into optimizing glide performance than you may have imagined. A really good overview webinar that was produced by glider and airplane flight instructor, Stephen K. Brown, is Gliding for the Airplane Pilot. Mr. Brown is the Boston FAASTeam Program Manager and has taught aviation at the collegiate level for many years. You can also earn WINGS credit for completing his webinar. Another great resource that is available from the FAA’s website or your favorite Pilot Shop is Aerodynamics for Naval Aviators. While an older and technical manual, the information is timeless.

We could spend hours and thousands of words discussing the finer points of optimizing your glide. Here, I’ll address an overview of this information and some rules of thumb to get the most performance out your airplane when gliding without a deep dive into the aerodynamics and explicit details.

If you took the time to plot your precise rate of sink for each and every airspeed, you would develop something that in the gliding world is known as the glide polar for the aircraft. The smoothed out arc on this graph is utilized for plotting many of these calculations. Your sink rate will be higher as you get closer to the stalling angle of attack due increased induced drag. Your sink rate will also be higher as you accelerate faster than an optimum airspeed as parasite drag increases and you have to decrease the angle of attack and lift to trade for that additional speed. 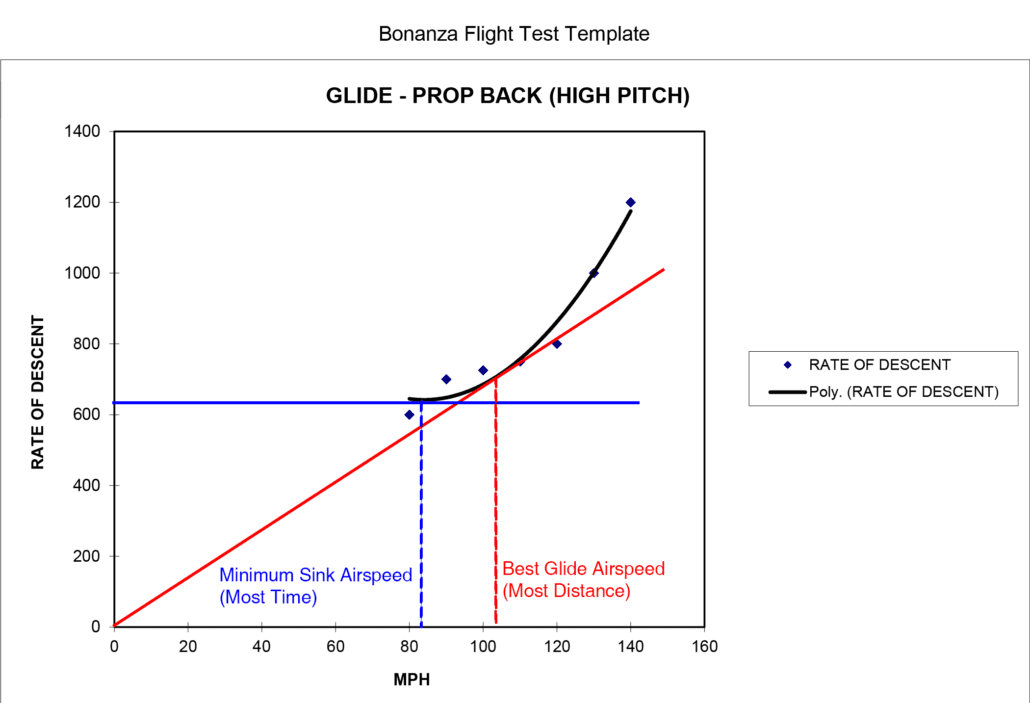 If you draw a straight line from the origin point of the graph (0 knots, 0 fpm) to a point on the plotted arc where the line can only touch the arc in one spot, you have drawn a line tangent to the arc. The intersection of this tangent line and the arc corresponds to the Best Glide airspeed for covering the most distance in a no wind situation.

Assuming that the origin point of your graph is in a lower corner, the lowest point of the arc corresponds to the Minimum Sink airspeed for the aircraft. Since Minimum Sink is time based, it is not impacted by the wind.

For a given configuration, the arc will shift up or down and sideways based upon changes in aircraft weight. Weight changes essentially slide the arc up and down the tangent line. The angle of attack for the optimum glide speed does not change but the actual airspeed where this occurs does change. The distance covered in a no wind glide also remains the same with the adjusted speeds. As the airplane becomes lighter, the airspeeds for Best Glide and Minimum Sink go down.

When looking at wind and your best glide distance, the arc can be shifted left or right based upon a tailwind or a headwind. A simpler way to do this is to shift the origin point of your tangent line by the magnitude of your headwind or tailwind component on the horizontal axis. Shift the origin point below zero (left) for a tailwind or above zero (right) for a headwind. This means that you should fly faster than the published Best Glide airspeed when you are trying to cover the most ground in a headwind and you should fly slower in a tailwind.

Now, shifting arcs and origins in a moving airplane while dealing with an emergency is not the best use of your time. Planning ahead and memorizing some simple rules of thumb can make a big difference.

When I managed a glider training program, I used the glide polar information to create a table in a spreadsheet that pre-calculated these various ideal speeds at different aircraft weights and for various wind conditions. I printed out this table and kept a laminated copy in the aircraft for quick reference.

Some airplane manufacturers will provide appropriate glide speeds for various weights of the aircraft. They may also show different glide speeds based upon the configuration of the airplane.

If you spend a lot of time in different rental aircraft, then the following rules of thumb may be of use.

There are several very sophisticated apps available in the gliding world that will precisely calculate how far a glider will go under the given conditions. These apps need to be set up with the glide polar for the aircraft and may tie into the vertical speed (variometer) and airspeed instruments in the panel. They will typically use GPS data to determine the current wind conditions and will recommend speeds to fly and the distance that may be covered.

Some installed airplane avionics may include advisory glide information which will provide an indication as to how far you can glide based upon the existing wind conditions and terrain. These systems are typically not adjusting the airspeed for the best penetration in windy conditions but will inform you how far you can go in the current wind and at your current airspeed.

Glide advisor profiles are also starting to show up in some of the better electronic flight bag (EFB) apps that many of us use every day. You do need to enter a profile for each aircraft that you fly in order for these features to be useful. For example, in Foreflight, you will need to enter the glide ratio of the airplane and the Best Glide airspeed. Both of these values should be found in most modern aircraft information manuals.

Finally, you can always rely on the old fashioned visual tools to determine if you can reach a landing field. If you are at your optimum glide airspeed and the point appears to be rising in the windscreen, you will not make it. If the point appears to be getting lower in the windscreen, you should make it to that point provided that the wind does not change drastically between here and there.