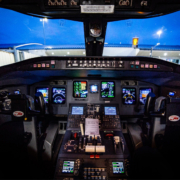 I recently earned a new type rating. This particular airplane happens to be the most popular in its super-midsized class which means the training program is in high demand and has to be scheduled well in advance. It also means the training is not inexpensive – a simple matter of supply and demand.

Training for a type rating has to be conducted as part of an FAA-approved curriculum and is traditionally provided by either an exclusive training provider supported by the aircraft manufacturer or by a few select training providers who specialize in type rating training and that conduct the training in large, full motion flight simulators. Flight simulators offer a number of distinct advantages including a safe, controlled environment that can always be tailored to the training scenario while offering an impressive level of realism. 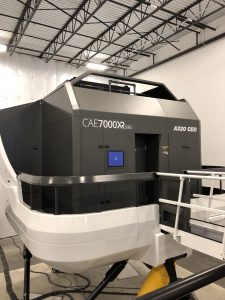 If you’re pursing an airline track, most of the regional and legacy airlines conduct their own training at their own facilities, but the process is relatively the same.

In the United States, a type rating is required to act as pilot in command of any aircraft that exceeds 12,500 pounds maximum takeoff weight and also for all jet aircraft. And while those outside of the aviation industry may be surprised that a pilot could become a certified specialist on a particular aircraft by flying only a simulator, it’s important to understand that certification requirements for the simulators require it look, feel and act like the real airplane down to the finest details. And if it happens to be your first type rating, there are additional requirements to obtain supervised operating experience in the actual airplane.

The training center I attended is not located on an airport because remember, I’m training in a simulator, not the airplane. It’s common for the training centers to be located near airports for ease of travel as pilots will travel from around the world for this specialty training. The training center had modern classrooms, a variety of amenities to make the stay comfortable, and support resources to provide the best opportunity for your success.

Preparation for the type rating begins well in advance of showing up at the door. The top providers all make use of dedicated apps that deliver manuals, checklists, training videos and more so that you’re ready to hit the ground running on the first day. Did I mention the training is expensive and in high demand!? It’s important to lean as much as you can on your own so as to not fall behind. The curriculum offers very little time to catch up. My training was scheduled for just over two weeks with only one day off. Each evening outside of class is usually a quick review, preparation for the next day, and ensuring you have the aircraft limitations and memory items down cold. 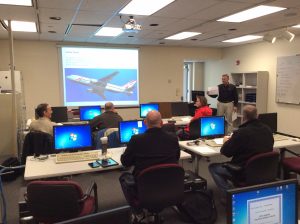 Type rating training begins with an intense multi-day ground school. The duration depends on the complexity of the airplane. In the case of my training program, ground school was seven consecutive, eight-hour days in which we explored several aircraft systems each day with one day dedicated to aircraft performance. Recall, you’re becoming a certified expert on this particular airplane so you’re expected to have a thorough understanding of each system, how to manage abnormalities with each system, and how the systems interact. And most important, you’re expected to know the limitations associated with each system – the same way in which you’re expected to know any limitations associated with your Cessna, Cirrus or Piper that you may be flying.

At the conclusion of ground school, you’re tested on your overall systems knowledge. In my case, it was a fifty-question multiple choice test. The training had me and my nine classmates well-prepared for the test.

Systems integration is a phase of training that, in some cases is delivered as a stand-alone module, but in my case, was delivered as a supplement to ground school. Some programs refer to this module as procedures training, but in either case, in this phase, you’re typically in some type of training device – either a cockpit mockup or even the in the actual flight simulator with no movement or motion. The level of sophistication of procedures trainers can vary, but the more modern trainers have full functioning flight decks, instrument and navigation systems, so that you can become acquainted with the layout. This is also the phase where you rehearse checklists and flight deck flows so that when you transition to simulator training, you can focus more on flying skills and less about locating switches. 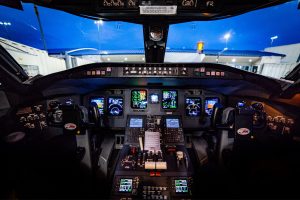 Now it’s time to climb in the full motion flight simulator – either hydraulic or electrically powered. I felt reasonably comfortable climbing into the flight deck even for the first simulator session given the hours on the procedures trainer learning the layout and checklist convention. It’s not uncommon for full motion flight simulators to be worth as much as the actual airplane so you want to make the most efficient use of your simulator time.

My simulator training consisted of six sessions with a partner also enrolled in the same training program. Each lesson is scheduled for four hours in duration – two hours as the pilot flying and two hours as the pilot monitoring (from the right seat). The final exam or checkride will test your ability to execute both jobs in the flight deck as that is what the type rating qualifies you to perform.

The simulator training lessons are common in most type rating programs in that you’ll begin with airwork – stalls and steep turns – and get to experience the airplane at different ends of the performance spectrum. This will include cold weather operations as well as hot and heavy scenarios in which performance is degraded and some experience with the airplane at high altitudes and the busy terminal environment with departures, arrivals and instrument approaches to ensure the aircraft automation and navigation systems can be managed effectively.

It’s never pleasant to have someone looking over your shoulder evaluating your every move, but the cliché is true – if you’ve been successful in the training program and met the completion standards and objectives, checkride day should be a non-event. And fortunately, in my case, it was. The oral exam was primarily focused on aircraft limitations and memory items required by the checklist. Sound familiar? It should because this should also be the expectation for any aircraft you fly whether it’s a Cessna Skyhawk or a Boeing 737.

The oral exam discussion on aircraft limitations and checkilist memory items inevitably leads into more in-depth discussions on the various aircraft systems. For example, if you’re asked what happens if you have an indication of a fire on the aircraft, you’re of course expected to know how to respond and follow the aircraft checklist, but also understand what affects accomplishing the checklist will have on the airplane. What resources will you then have to get the airplane down for a safe landing and ensure the safety of all onboard.

As has always been my experience, the examiner is not out to trick you, but rather confirm you are capable of commanding the aircraft and affecting a safe outcome for any abnormality that could arise. And the same could be said for the flight portion of the checkride.

The checkride flight consisted of the airwork, emergencies and multiple instrument approaches to the John F. Kennedy International Airport (JFK) in New York (the magic of simulation). Because of the high-demand for simulator training, this particular device operates 20 hours per day. Thankfully my checkride was scheduled during the hours that I would normally be awake, but that’s never guaranteed.

I can’t wait to get my hands on the real airplane! 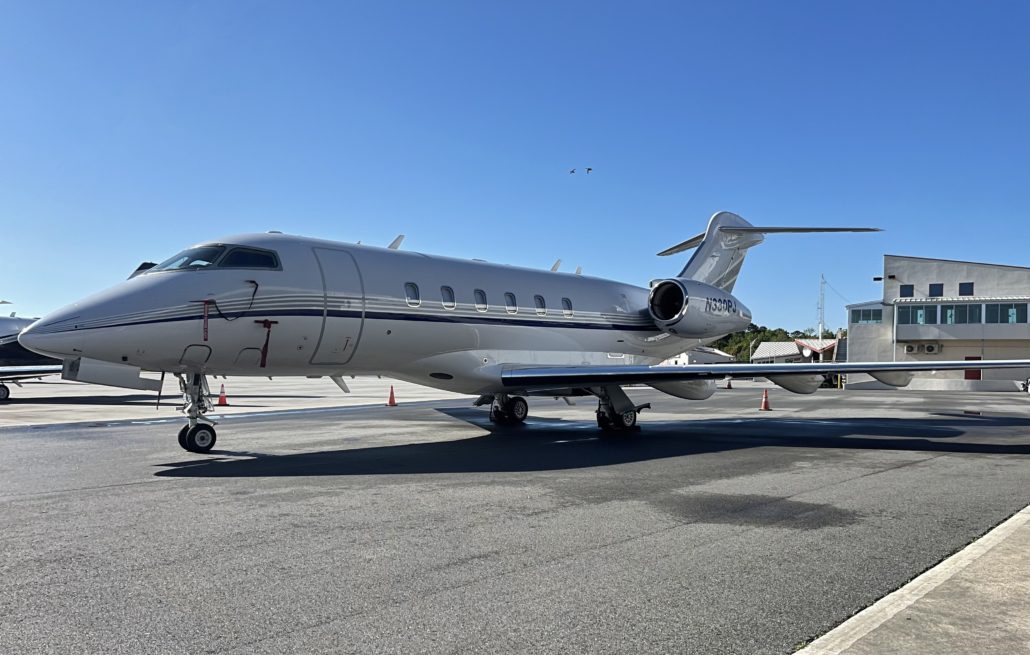