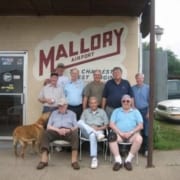 A rule of thumb has been attributed to many origins (including the largest stick a man could use to beat his wife) but is generally meant to mean a “reliable approximation.”  Anyone who knows me will attest to the limit of my intelligence and general disdain for poring over page after page of charts to figure out how long of a runway do I need to take off or land, what my glide ratio is, how much gas do I need to get there (wherever “there” is) or how much hay will I need for the cows this winter.

I fly – and live – by rules of thumb.  I want to share three of these and pass on some good advice that may keep you flying and alive for a long time.

I have been blessed to count several veteran flyers as my friends and mentors over the years.  One of these is Benny Mallory. 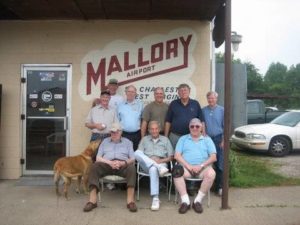 Benny Mallory and the boys

Benny (back row 2nd from right) owns and runs Mallory Airport (WV12) in South Charleston, WV.  Benny is old and experienced enough to know and know better about what you can and cannot – as well as what you should and should not do in an airplane.  My guess is more people have gotten pilot’s licenses from Benny’s 24 ft wide, 2000 ft long (if you include the loop at the end) dogleg right airstrip than the rest of West Virginia put together. The numerous shirt tails on the wall of the FBO attest to this.  I met Benny back in 2002 and he told me that he too used to sell Cessna aircraft as part of his business. He asked me “Charlie, do you ever have to demonstrate the airplanes on a private grass strip?”

“Yes,” I replied. “But I gotta tell you, sometimes it can be uncomfortable watching the fence posts coming at you and wondering if you’re going to clear them or not.”

“I know what you mean,” he said. “Here is what you can do.  Walk down the length of the runway and count your steps.  It doesn’t matter how long the sectional or the owner says it is.  Now walk back half the steps and stick you a stick, or lay something down right there.  Now take off.  If you have reached 70% of your takeoff speed by the time you get to your mark, you will be OK.  If you haven’t, well you got just as much distance to get stopped in as you had to accelerate.”

It made a lot of sense.  As the aircraft accelerates the second half of the runway will be used up quicker but the rate of acceleration will be slower.  That is why the 70% (instead of 50%) is important.  A Cessna 182 lifts off around 55 knots so I know I should be approaching 40 knots at the half-way point.  Since then I have used Benny’s system several times, now confident that I will be flying before running out of runway instead of the other way around.  You may say this is a rule of paces instead of a thumb, but it really helps me maintain a healthy blood pressure during these takeoffs from fields that are often shorter than advertised or whose mower was set on “rough” rather than “fairway.”

One aspect of my job in aircraft sales is “checking out” owners in their new airplanes.  A common thread of many of these pilots, including those with a fair amount of experience, is they, over the course of their flying careers, have added (presumably from a fear of stalling on final) some insurance knots to their approach speed.  It is my observation the average pilot adds one knot for each year of experience, plus a knot for each child and maybe 5 knots for each wife they have.

The POH will provide a range of recommended approach speeds, but fails to provide the best speed “crossing the fence.”  The true best speed will vary depending on winds and load, but for most of what we fly, multiplying the stall speed in landing configuration (flaps and gear extended) by 1.3 will provide a usable number.

For example, a Cessna 182 has a “dirty” stall speed of 41 knots.  Multiply this by 1.3 and you should be near 53.3 knots when you start your flare (55 knots will do – remember rules of thumb allow for approximation).  Additional speed will just have to be bled off while you are in ground effect, which decreases induced drag or will result in ballooning which will require essentially another approach (hopefully this time at a more appropriate speed).  Too little airspeed may result in a very hard landing as the wings may not be capable of producing enough lift to overcome the descent.

Another “rule of thumb” in this regard involves wind gusts.  The rule is to add 1/2 the gust to your airspeed.  The fact here is the aircraft has inertia and does not react immediately to changes in airspeed.  A little cushion is necessary should the gust die rapidly, causing a sudden decrease in airspeed.  I have met several pilots who remember this rule, but forgot the gust part and add 1/2 the total wind speed to their final approach.  Again just as an airplane needs sufficient airspeed to produce lift for take off, it must slow enough to lose that lift to land – and stay on the ground. Extra airspeed just means extra time inches from the ground to screw up the landing.

Most of us have been admonished since our first flying lesson that if the engine quits on takeoff, land straight ahead.  Do not try to turn back to the airport.  In reality, we should think about this a little bit.  The airport is designed for airplane landings.  They tend to be flat and may have a mechanic to fix the problem.  The field ahead?  It may be designed to grow corn or trees, probably doesn’t have an A&P mechanic working there and may involve a phone call to the NTSB after the landing.  The prohibition comes from your instructor not wanting you to stall/spin the airplane into the ground by turning sharply at a low altitude, under the stress of an engine failure, by losing airspeed and/or coordination while very close to the ground.

It makes sense, however, that there should be some altitude from which you can safely turn back and conduct a landing on the airport from which you just departed.  The “rule of thumb” I learned how to find that altitude came from Barry Schiff, author of The Proficient Pilot.  The technique is pretty simple.  From a safe altitude (say 3000 ft. AGL or so) make some turns to clear the area and establish a climb at your normal climb speed (normally something pretty close to Vy).  Add carb heat if warranted and close the throttle while noting your exact altitude.  Count or time 7 seconds. Don’t cheat because research shows this is how long it takes us to realize our engine is broken and initiate the turn.  Now make a 210 degree turn at best glide speed followed by a 30 degree turn in the opposite direction.  Again note the altitude after these maneuvers are complete.  Subtract the latter altitude from the former and this is how much altitude is required for you in that airplane to turn back to the airport and land on the runway from which you departed.

The extra turn will be needed to align the aircraft with the runway after turning to the centerline.  Preparation for this maneuver, should it actually be needed, begins at the takeoff briefing.  You do brief the takeoff don’t you? Be pre-wired for an engine failure until clear of the traffic pattern and the cruise portion of the climb has begun.  Decide before you advance the throttle for take off which way you are going to turn and minimum altitude you would consider making that turn.  If there is a crosswind, the turn should be made into that wind so it will blow the airplane back towards the runway instead of away from it.  Remember, a parallel taxiway will work for a runway as well.  Just remember, the odds of surviving an off-airport landing under control is better than spinning into the numbers so this skill should be practiced to proficiency at a safe altitude and only tried on an actual take off the day it is required.

These “rules of thumb” have served me well during my flying.  Think about how you can use them and if you have additional ones for all of us, leave a comment.

Oh, and that good advice?  Again it comes from Benny Mallory.  One day I had made some sales calls in West Virginia and was ending my day at Mallory Airport.  I was getting ready to leave and Benny saw me call Flight Service inquiring about the winds aloft for the return to Sporty’s (at I69).  “Are the winds going to be bad?” Benny asked.

“Naw,” I replied. “I just want to figure my groundspeed to make sure I had enough gas to get there.”

To which Benny told me “Son, If you think you might need gas, you probably do!”  So for 10 gallons of gas I had the peace of mind knowing I would make it – no sweat.  Good advice.

By the way, I will store three 1000 pound bales of hay for each cow this winter.