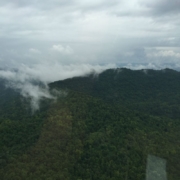 Flight training is often presented as one long journey toward the Private Pilot checkride, but I think of it as three different phases stacked on top of each other. In the first phase, you’re learning how to control the airplane, so the emphasis is on steep turns, stalls, and airspeed control. Then you move to pattern work, learning how to make consistently smooth landings and how to talk on the radio. These two phases understandably get a lot of attention, but the third phase, cross country flying, usually gets short shrift.

Venturing beyond the practice area is the most exciting part of flight training, but it requires new skills and a new approach to decision-making, especially when it comes to weather. When this is covered, it’s usually in the context of how to get a preflight weather briefing. That’s a good start, but safely navigating weather on a cross country requires a lot more than just knowing what to look at before takeoff.

How low is too low?

The trap to avoid at all costs is VFR into IMC, a fancy phrase to describe the scenario when a non-instrument rated pilot flies into clouds, often with disastrous results. To a new pilot, stumbling into clouds or low visibility might seem downright stupid, but it’s deceptively easy to do if you don’t know what to look for. And that’s the problem—many student pilots have never seen weather worse than “clear and unlimited.” That’s fine for your first solo cross country, but if you plan to carry passengers on trips after you earn your certificate, you should experience marginal weather (with a flight instructor of course).

The first thing to note is the three main factors that affect flying weather: ceiling, visibility, and precipitation. A 3000-foot ceiling with no rain and 10 miles of visibility is considered “marginal VFR” but it’s perfectly flyable, at least in flat terrain. A 6000-foot ceiling with scattered showers and 3 miles of visibility is also marginal VFR, but flying visually in those conditions is a recipe for disaster. The key is to go beyond the colored airport symbols on your iPad and really understand all the weather variables. Reading about it is one thing, but until you see how it translates into the view out the front window, it’s hard to appreciate the difference.

In general, visibility is more important than ceiling for VFR flying, and more likely to be misinterpreted. Most student pilots are familiar with the METAR report of “visibility 10 miles,” but often that’s because airport weather sensors don’t report any values above 10. If you typically fly on clear days, you might actually be used to seeing 25 or 30 miles of visibility. The first time you see 10 miles, it might seem surprisingly hazy; the first time you see 5 miles it might seem like you’re flying blind. Learning to see the difference takes time, but if you can gain experience in varied conditions you can calibrate your “Mark One Eyeball.”

Another lesson to learn is the effect of terrain on weather. As you fly longer cross country trips, you’ll inevitably encounter mountains, river valleys, and cities. All of these can influence the weather: a small bend in a river can drop visibility below 5 miles on cool fall mornings; an airport on the coast can experience wind shear that is nonexistent 10 miles inland; a ridgeline can cause moist air to rise and clouds to form. Such microclimates are often so localized that they won’t show up on nearby METARs, so you have to learn how to anticipate unreported weather based purely on the terrin. Of course it’s impossible to see all of this in a typical Private Pilot training program, but seek out as much variety as you can.

In addition to getting a feel for what different weather conditions look like from the left seat, you’ll also want to practice abnormal procedures. The most obvious one is a diversion. If you’re flying toward a destination airport and weather conditions start to worsen, it’s not enough to simply recognize the problem; the next step is to identify a suitable alternate (a portable weather receiver is invaluable here) and fly to it. Get comfortable evaluating different options in flight, and practice the procedures for navigating to a new airport and making a safe landing.

A portable weather receiver is a good investment for cross country flying.

Being comfortable with technology is important during such a scenario, starting with the aforementioned weather receiver. These are much more than gadgets – knowing what the weather conditions are for that airport 25 miles off the right wing is essential information. Make sure you understand exactly what these devices can and cannot do.

An autopilot is another critical tool for safe cross country flying, but one that is often ignored in flight training. Simply put, if the airplane you fly has one installed you must know how to use it. It’s not there to make up for poor flying skills, but in an emergency situation it is a potentially life-saving tool. If you ever do stumble into a cloud, you should be proficient at engaging the autopilot and using it to fly you to VFR conditions.

Nobody likes to add time and expense to a flight training plan, especially at the end when you’re anxious to take the checkride. But the ultimate goal is not to get a plastic certificate, it’s to become a safe pilot, and you can’t avoid something if you don’t know how to recognize it. So the next time the forecast shows 2500 overcast and 5 miles of visibility, call your flight instructor and go flying. If nothing else, you might learn what “too low” looks like in the real world.