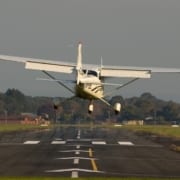 Editor’s Note: Welcome to part three of a four-part series on Chris McGonegle’s experience as a rusty pilot – a relatable category for many. Chris is an Instrument-rated Commercial pilot and product manager with Sporty’s Pilot Shop.

A pilot’s logbook is an interesting thing. Initially it’s perceived by budding students as a ticket to the big leagues, requiring a ferocious level of annotation and care. Early on in grade school a gold star was an indication of success, and in those early flights, a big bold “1” placed in the landings column of my logbook carried a similar rewarding feel.

Of everything in my flight bag (yes, I initially kept it in my flight bag), it was the most important piece by far. I looked forward to every debrief with my instructor to add to my logbook and forever solidify a record of my experiences in the airplane. It can be quite an emotional walk down memory lane for those who have filled the pages with a record of their travels and experiences. To every other person, it will appear as a mindless timeline of dates, numbers, and signatures. For the pilot whose name goes on page two, it’s an intimate recording of our desire to defy gravity.

For a rusty pilot, a logbook also serves (shamefully) as a reminder of our retreat from flying. Just as a flunked course on a report card conveys a lack of study or a gap in a resume indicates a loss of employment, a multi-month or even multi-year pause as pilot in command translates to a break from the aviation fold. Ironically, a pilot’s logbook can serve as the report card and the resume in addition to an autobiography.

My position with Sporty’s Pilot Shop required that I reactivate my currency once I’d settled into the day to day of my new position. Once my core responsibilities were understood and managed, I was ready to start flying again. In Southwestern Ohio, the first couple months of the year aren’t the most advantageous towards flight lessons, so I devoted myself to study. The Pilot’s Handbook of Aeronautical Knowledge and Airplane Flying Handbook were hands-down necessities. Just like rereading a novel and knowing where the story is going to go, there was a sense of confidence gained when turning the pages of those books and knowing where the information was leading before I got there.

Additionally, I watched all the videos in the Sporty’s Learn to Fly Course and the Instrument Rating Course. It was serendipitous when I was reminded that I had served as a stand-in for many of the video segments of these courses and saw my somewhat younger self covering materials that I was now studying.

Throughout my research there were a lot of familiar topics that needed reviewing, but two subjects that were completely new to me were ADS-B and Basic Med. Both subjects seemed perplexing initially, but through research and reviewing readily available webinars online, I quickly came to realize that these are significant improvements to the aviation world; one drastically improving safety and the other a new type of medical certificate that catered to the GA population.

It’s fair to say that the rules for operating a motor vehicle when our parents learned how to drive were fairly similar (if not identical) to the rules we learned when preparing for that intimidating driving test. The reason flying is one of the safest modes of transportation is because of constant editing and critiquing of the aviation system and a requirement for all participants to keep up with new regulations. I wasn’t going to be an uninformed outsider.

My first official step toward renewing recency took place on a cold, rainy day in early February, 2020. I remember walking into the Airman Medical Examiner’s office slightly nervous for my inspection of personal airworthiness. Would the examiner pick up on my orange hue from all the rust that had accrued and rule me out as an eligible pilot? Should I have been running more often and eating more vegetables with every meal to make sure my vitals were at peak levels?

My unfounded concern quickly melted away when a picture of an old B-25 hanging on the wall caught my attention and helped me to realize I was in the presence of another aviation appreciator. I quickly recognized that the doctor was just another earthbound being who craned their head towards the sky every time an airplane was within view, and after some small talk and an examination, I was deemed fit for duty.

I walked out of that office with my first class medical in hand, ready to tackle the upcoming left seat. My position with Sporty’s wouldn’t demand anything beyond Private Pilot Certification abilities, and a third class medical would have sufficed, but I’ve always viewed the first class medical as the strictest to attain and receiving the highest endorsement from an MD confirmed, at least in my mind, that I was fit to pilot an aircraft.

I’m extremely fortunate to work in an industry, and more so within a company, where flying an airplane is one of the responsibilities that comes with the territory. Prior to my first rust cleaning lesson, I’d enjoyed a handful of flights with my team, traveling to local airports for a $100 hamburger or slice of pie. Even though I wasn’t in charge of controlling the airplane or making radio calls, these flights were analogous towards dipping my toe back in the aviation pool. I could study all the maneuvers and performance tables pertinent to a commercial certificate while on the ground, but the feel of a 45-degree bank while maintaining altitude was a long lost sensation that brought back memories.

Just as a baseball player approaches the plate with a unique stretch or bend in their knees to awaken subliminal muscle memory and increasing their chance of connecting bat with ball, these passenger flights were a way to reinvigorate my desire to pilot an airplane in addition to reminding me what “flying by the seat of your pants” felt like. With freshly dried ink on my medical certificate and a reacquired aviation bug (a famished one at that), I was excited to get back at the controls of an airplane.

That first flight in mid-February of 2020 is a vivid one filled with anxiousness, familiarity, and awe. My anxiousness showed when I started my preflight 20 minutes before our flight was scheduled to begin. The familiarity surfaced when I released the ignition from the start position and the engine came alive with a long forgotten rumble and vibration that reminded my body and mind, you’re at the plate now. And the awe was evident on my face when I pulled all three wheels of the Cessna 172 off the pavement and left the bounds of terra firma.

As I watched the runway and then the trees disappear under our wings, I knew I was right where I was supposed to be at that moment in time. The exhilaration of nullifying the 9.8 meters per second squared that keeps layman on the ground is one that only a fellow pilot can share in. After departing the traffic pattern, we ventured into the local practice area and, after performing clearing turns, we jumped right into steep turns.

As much as I’d like to say I pegged the altitude and rolled out within five degrees, my first flight maneuver in almost five years was not to standards—but sure was it fun. Through repetition and practice I eventually started feeling my wake when I’d roll out, and the confidence began to build. After a few more mediocre maneuvers, we direct-to’d the airport and ran our checklists.

Due to starting our lesson an hour before the normal flight school blocks began, the traffic pattern was completely clear and my workload consisted of just flying the pattern and making calls. I purposely flew extended legs of the pattern to allow additional time to get prepared for my first approach in half a decade, and wouldn’t you know, my Irish luck kicked in when Mother Nature gifted me with a paltry headwind of three knots at 20 degrees off the nose.

As the runway numbers grew larger and larger, I kept my scan cycling between airspeed and runway and before I knew it, I was exchanging airspeed for my angle against the horizon. “Don’t climb, don’t climb,” was the mantra from the little voice inside my head. I stalled the airplane less than a foot off the ground and was elated. The amount of rust that fell off my aviation ego right then and there could have been mistaken as a pile of late fall leaves a quarter of the way down runway 22 at Clermont County Airport. I taxied to our parking spot and returned the Skyhawk to its quiet, albeit short-lived, slumber.

We meticulously debriefed the flight (at my request) and discussed areas to improve, literature to review, and scheduled our next flight for the following week. I remember walking to my car after our debrief and feeling a type of bliss at what I had accomplished in the previous two hours. I’d successfully dusted off my pilot’s license, cleaned the rust off my airborne prowess, and in return I had fresh ink in my logbook. Confirmation that the physics of flight hadn’t changed during my time away reassured me that I could regain my proficiency and unlock this hidden skill that had gone dormant for years of my life.

It was a great feeling, and I may not have stopped smiling that entire day at work. But I wasn’t rust free, and I had a little more work to do before I could call myself an active pilot.