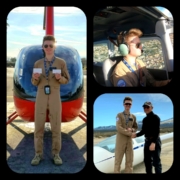 Editor’s Note: A special congratulations on behalf of Sporty’s and Student Pilot News to Frankie Fremont who celebrated a memorable 16th birthday by soloing a helicopter (R22), airplane (C172) AND earning his Private pilot glider all in the same day. Congratulations Frankie on an amazing feat!

The moment: Soloing Rotary, Soloing Fixed Wing, and Passing the Glider Private Pilot Check Ride — all within a 24 hour period starting on my 16th birthday.

The memory: After months of preparation, the day had finally arrived, and the fact that it was actually my birthday was almost a forgotten item. So many people had played a part in helping to prepare me for this goal, and I felt like I wanted to avoid any mistakes as the best way to thank them for all of their efforts. My family was never able to find any other documented instances of someone accomplishing all three of these events on their 16th birthday, so if this is a first, I’m humbled and grateful to all of those who helped overcome so many obstacles.