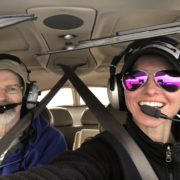 The moment: Flying with my Dad

The memory: My father always wanted to be a pilot for the Air Force or commercial airlines, but was never able to make his dreams come true, settling for a computer programming position with a major airline. He often encouraged me to pursue flying while I was a young adult, but it wasn’t until moving to Alaska that I realized aviation could open up a world of opportunities besides a career in the military or as an ATP.

After my father was diagnosed with terminal cancer, I made it my goal to earn my private pilot’s license and take him as my first passenger for our last adventure together. The day after my successful checkride, I flew him down to see family near Colorado Springs. It was one of the last weeks he could leave the house, and he passed away a few months later.
But that one flight will always be my most exhilarating and rewarding aviation moment; to hear the return of excitement and life in his voice one last time was truly the greatest gift I could ever receive from aviation. Thanks for helping make it happen.