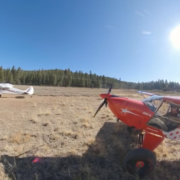 Having fun as a pilot isn’t just about flying, although when you’re in a taildragger landing on dirt strips next to a river, it is pretty fun. But as Trent Palmer shows in this video, general aviation is about the people as much as the airplanes. Ride along as he and some friends explore some remote areas in their bush planes.