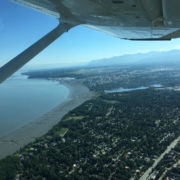 On June 19, 2019 we departed Lake Hood’s (PALH) 2,200 foot long gravel runway in Skyhawk 12138 rented from Arctic Flyers and Alaska became the 50th state in (or over) which I have flown an airplane.  During the 1 hour flight, we flew over the Susitna River Flats and were able to observe Grizzlies, Moose and a pod of Beluga whales – in their natural habitat – from an altitude of 600 feet.  Rather than undergo a formal checkout including studying the ins and outs of Anchorage’s FAA Part 93 area, we took CFI and knowledgeable tour guide Rick Ruess along on this memorable flight.

Flying in all the states was never a goal of mine, until last winter when my wife, Rose Ann, and I were planning our Alaskan trip to see my cousin who lives in Anchorage.  I realized this would be the 50th state I had visited and started perusing my log books to determine in which states I had flown.  I noticed that during a 2007 trip, delivering a 182 to a customer in Connecticut, I had knocked out VT, NH, ME, MA, RI and CT as we flew to meet the experience requirement his insurance company demanded.

Flying a new RV12 back from the factory in Oregon allowed me to add WA, ID, MT, UT and CO to the log book.   A previous flight from the Cessna factory in Bend, OR indicated I had operated in CA, NV, AZ and NM.  In 2005 we rented a Skyhawk from Kahului airport for a memorable flight over Maui, Lanai and the big island of Hawaii including directly over the active Kilauea volcano.  So with the islands and corners covered, lots of flights in central, eastern, and southern US logged, the only state left prior to June was Alaska.

Seeing America from 3,500 feet (or less) rather than 35,000 feet (or more) has given me the opportunity to ponder how (and why) I am so obsessed with flying airplanes.  I have come to believe we are so infatuated with flight because the air, for most of human existence, has been the one aspect of this planet off limits to us.  We are made to walk upon the land.  We can swim some distance in our streams, lakes, oceans and even hold our breath for a minute or so to explore their depths.  But we cannot fly.  We simply aren’t made for it.  Our bones are too dense, our lungs inadequate to take in the considerable Oxygen required to metabolize the necessary energy.  We have hair instead of feathers.

But mankind has always dreamed of flying.  Quoting from the Old Testament Book of Isaiah reference is made to “But they that wait upon the LORD shall renew their strength; they shall mount up with wings as eagles:”  Greek mythology tells the story of Icarus, who after his father constructed him wings of wax and feathers flew too close to the sun, melting his waxen wings and falling to his death in the sea.

From the 9th century stories of Arabian Nights, we learn of the idea of a magic carpet described as, “Whoever sitteth on this carpet and willeth in thought to be taken up and set down upon another site will, in the twinkling of an eye, be borne thither, be that place near hand or distant many a day’s journey and difficult to reach.” This description leads me to believe our airplanes are real, not mythical, magic carpets.

In the early 1800s it took Lewis and Clark over two years to travel from Pittsburgh to the Pacific coast.  By the mid-1800s, settlers, averaging 10 miles a day could travel from Missouri to Oregon in about five months.  By 1930, using trains with sleeper cars at night, and Ford Tri-motors during the day, a coast to coast trip could be accomplished in three full days.  Today the estimated time for that trip in a Cessna 182 would be about 17 hours.  Easily accomplished in two days with a leisurely stop for a night in Oklahoma City about half way.  Rather than wind through mountain valleys and along river beds, the airplane allows us to fly the relatively straight line old timers would refer to “as the crow flies.”

So our airplanes are indeed magic carpets allowing us to decrease both travel time and distance.  Truly a modern miracle that has changed our lives and for us pilots, worth the considerable time and money spent on our obsession.  So on your next flight, take a few moments to ponder where you are, how you got there, and why you, of all the people who ever existed, were lucky enough to be born in this age of flight.  Successful flights, common with birds, bats and bees has only been accomplished by about one hundredth of one percent of humans who have ever lived.  We know that looking at the ground from the sky in an airplane we are piloting changes forever how we pilots look at the sky from the ground. Enjoy it.  I have.