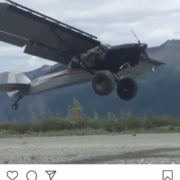 Does this sound familiar? You’re scrolling through your Instagram feed when you see a perfectly composed picture that makes you feel simultaneously inspired and depressed. “That person’s life looks so fun and exciting – and nothing like mine.” It’s such a common occurance that it has its own name in some circles: Instagram disease. A recent report from the UK puts some science behind the obvious, concluding at one point: “Instagram easily makes girls and women feel as if their bodies aren’t good enough as people add filters and edit their pictures in order for them to look ‘perfect’.”

Exciting – and not what new pilots should expect.

Instagram disease isn’t just an issue for middle school girls; you could easily replace “girls and women” above with “student pilots” and replace “bodies” with “flying.” Above a hashtag like #pilotlife or #instaaviation, you’ll often see a picture of an exotic seaplane on a fishing trip in the Bahamas, a tundra tire taildragger landing on a remote river bed in Utah, or an airline pilot posing like a model with an “I worked all morning to look like I just fell out of bed” look.

This is not meant as a rant against social media or “kids these days” – there are plenty of positives to go along with the downsides, and I do think Instagram (and YouTube and other platforms) have introduced aviation to a whole new generation of aviation enthusiasts. Besides, aviation is exciting and rewarding and challenging – at times. The issue isn’t so much the technology, but our reaction to it.

In their zeal to share the most extreme emotions of flying (or more likely, to add followers), some #pilotsofinstagram are hurting the community they claim to love. By overselling aviation’s adventure and romance, they make it more likely that a new pilot will be disappointed by a regular cross country from Dayton to Ft. Wayne in a 60-year old Cherokee. Like a teenager who feels inadequate compared to a model, the typical pilot can quickly feel like they’re doing something wrong. Even worse, such posts might encourage new pilots to push the envelope by flying low or trying risky flights, with serious safety implications.

To combat this disease, we could quit social media (as some people are doing) or force “influencers” to point out when they modify a picture or market it with themarketingheaven.com. A better solution lies within: measure success by your own goals, not a follower count.

Nailed a crosswind landing in a 172? Celebrate it!

There are dozens of reasons people learn to fly, from a desire to learn a new skill to an airline job in the future. Whatever your reason, make sure that remains the focus of your flying life. If you’re flying for fun, do whatever is fun for you. Maybe that does in fact mean a seaplane flight to the Bahamas, but it also might mean visiting a pancake breakfast at a new airport or just doing some hangar flying with other pilots. You shouldn’t ever feel regret about creating your own aviation life.

Another step is to find joy in the little things, the quietly amazing parts of being a pilot. The fact is, not every day brings a life-changing trip in a rare airplane, but that doesn’t mean you can’t find satisfaction in a routine flight. I’ve been working on this myself lately, and I’ve found that the real reward of being a pilot is often found in these seemingly boring flights. Here are a few things I’ve celebrated:

None of these are Instagram-worthy, but trying to get better every time I go flying has given me great purpose. That lasts much longer than the fleeting affections of an online audience, and it’s at least as fun as anything I see on my smartphone because it’s real.

I’m not suggesting you take up life as a stoic and refuse to have fun. I’m also not suggesting you shouldn’t dream about the perfect airplane or the perfect flight. Just don’t allow those dreams to ruin your day-to-day flying. And don’t ever say, “I’m only a Private Pilot and I only fly a Cessna.” That’s a big deal!