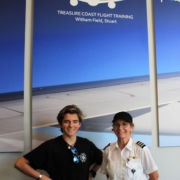 The moment: My son’s first solo

The memory: We weren’t sure if Friday, June 29, 2018, was going to be just another flight lesson with Evan’s fabulous CFI, or if she was going to kick the baby bird out of the nest and tell him to go that morning, but his dad and I decided to be there with cameras just in case.  (I’m that mom who captures everything with her camera!)

This was a major step in our then-17-year-old’s goal of becoming a pilot.  At the age of four, he defined the concepts of lift and drag for his preschool teacher and announced that he was going to be a pilot when he grew up.  He has never changed his mind.  He got his private pilot’s certificate a short time after this solo and will have his glider endorsement before too long.  With all that he has going on his Senior year of high school, he will probably wait to begin his Instrument Rating until he gets settled at college and sees what kind of time he will have there as an Aerospace Engineering major and member of the marching band, but he is definitely on his way.  We are so proud of and happy for him for pursuing his passion! – Leslie Walling