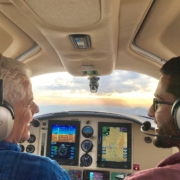 The memory: When I was little, my dad (left seat) would take me to the War Eagles Air Museum at the Santa Teresa Airport (KDNA) where I would marvel at the aircraft and we both would dream of one day being able to fly. We would look out the museum window to see the Cessnas from the local flight school doing Touch ‘n Gos and wonder when that would be us.

After many years of looking up at airplanes, when I left for college, he started flight training without me! And I started a few years later. We both have our PPL, and he has his Instrument rating (I’m working on my IFR) and we’re both airplane owners. This photo marks my dad’s 6-year solo anniversary, 5-year Private anniversary, and 2-year IFR anniversary.

Here’s to many more years of flying together; may we have blue skies and tailwinds.