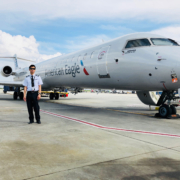 Airline hiring has reached a feverish pace never before seen in the industry. Opportunities are attracting individuals of all background and experience levels with dreams of becoming a professional pilot. To help shed some light on the life of an airline pilot, Sporty’s Student Pilot News is pleased to introduce Mr. Alan Nguyen. Nguyen is a Sporty’s Academy flight instructor and first officer at a regional air carrier. Please enjoy the latest installment of this multi-part series on transitioning to the airlines. Ed.

Read Part I – Interview and ATP-CTP

Pilot indoctrination lasted about a week.

Pilot indoctrination is designed to familiarize new applicants with airline operations and expectations as a first officer. It lasted about a week and a half. It consisted of reviewing HR paperwork, company policies, procedures, and documentation. The company also had various presentations on scheduling, initial operating experience, crew pay, benefits, and any programs the airline has incorporated such as AQP, LOSA, ASAP etc. We also set up our EFB on the company-issued iPads, tried on our uniforms, selected our sim partner, and placed our bid for the aircraft we’d like to train for.

Some of the fundamental guidance documents the company trains for are the flight operations manual, aircraft operating handbook, and the airline’s operations specifications. In short, these documents spell out the procedures, policies, limitations, and rules that the pilots must abide by. Another subject that receives a lot of attention is the flight release, a document that provides the pilots information ranging from crew members, weather, to takeoff and landing data – the elements essential to a particular flight. At the end of indoctrination, we were tested on the previously mentioned documents.

With indoctrination behind us, it was time to move into the aircraft systems class. Systems is straight-forward and what you expect it to be. It’s no different than when you were learning about your first training airplane during primary training. Our class convened each day and learned about each system of the airplane in details ranging from the APU, engines, hydraulics, flaps/slats, primary/secondary controls, the autopilot, etc. They also reviewed emergency system backups, switch lights, the different switch positions, and what each of them mean and do.

Procedures training allows you to learn the flight deck.

After systems, we moved onto the computer-based procedures trainers. This is where we get a taste of what we will see in sim training. The procedures training demonstrated weight and balance, flows, checklists, procedures, call outs, and Quick Reference Handbook (QRH) usage. This is essentially the chair flying aspect that builds the ground work in preparation for simulator training. We had several lessons prior to doing a stage check and a mock oral examination.

At this point, we were expected to be prepped and ready to go for the oral exam. The oral was quite extensive and required a lot of studying on everything covered up to this point. The exam focused heavily on regulations, systems knowledge, aircraft limitations, company procedures, and memory items. Completing the oral is a huge milestone in airline training!

Ground school was over, a welcome relief, but it was time to prepare for simulator training.

My sim partner and I went through eight simulator sessions. We were trained to be able to apply and correlate everything we’d learned in ground school. Throughout each lesson, we were presented with several emergencies, weather scenarios, abnormalities, malfunctions, and a lot of instrument approaches, both multi and single-engine. We also went over the usual flight maneuvers profiles: power on/off stalls, maneuvering stalls, and steep turns.

We were expected to perform both pilot monitoring and pilot flying duties. At the end of the simulator lessons, it was time for the proficiency check. The proficiency check is the airline practical checkride where an examiner will evaluate the performance of the applicants much like previous checkrides. It was a long night, but all the hard work paid off in the end. My sim partner and I both passed and we were officially type-rated airline transport pilots!

IOE is time to fly the real thing with a training captain.

Time to go fly the real thing! Crew scheduling assigned my first trip and this was the beginning of my initial operating experience (IOE). IOE is the period where you will spend your first few trips with a line check airman who will aid in transitioning from the simulators to real-world airline flying. Your IOE captain will discuss operations ranging from pre-flight, airport procedures (security procedures, jet bridge access, safety precautions, etc.), crew rooms, hotels, and several other items. There’s nothing like putting on the uniform for the first time.

For the first few trips, there were about 50 or so unsuspecting souls that unfortunately had to endure my first couple of landings while I was learning the proper technique and sight picture. No worries – my crew was understanding and I had apologized to the flight attendants in advance. IOE on average is about 30-50 hours and at the end of it is a line check.

The line check is just another normal flight where I was expected to be able to safely fly the airplane with minimal assistance from the line check airman other than the normal pilot monitoring duties. Passing the line check was the finish line! I was released to the line where I sit on reserve until I have enough seniority to be able to hold a line (schedule).

After all the years of persistent studying, dedication, and extensive training, I can live out my childhood dream of being an airline pilot!

Living my dream of an airline pilot career.