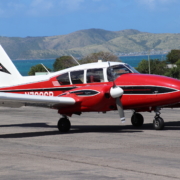 “Take the Aztec to Nevis,” Sporty’s Founder/Chairman, Hal Shevers, stated last fall. We took this statement seriously because it is fully in line with the company’s philosophy.  We fly airplanes, we teach people how to fly airplanes, and we reward employees for earning their pilot’s certificate. We use airplanes to get from where we are to where we want to be and in the process, invent, discover, and test products pilots use to help them get from point A to B.

These experiences foster development of the leading edge products and educational courses for which Sporty’s is famous. A February trip to Nevis in the West Indies would present the opportunity try some products and escape the Ohio Valley winter. This is the second of three installments about our adventure in Sporty’s iconic 1963 Piper Aztec. Follow along on our Caribbean adventure and start planning your own.

Read Part I from this 3-part series.

Our flight path to Nevis.

Monday, February 5 turned out to be another bright day in Georgetown. Continuing from Part I of our journey, after grabbing some breakfast out of the airport’s machine, a call to Leidos Flight Service confirmed no significant weather for the three hour route to our fuel stop in Puerto Plata, Dominican Republic.

In the midwestern and southeastern US it is easy to file and have accepted a flight plan “Direct To” the intended destination.  Most of the time it works because we are almost always have radar coverage and we generally fly between lower volume airports where departure and arrival procedures are unnecessary.  When land fades behind the horizon so does radar coverage in Indian Country.  Indian Country is a nick-name controllers have given to controlled airspace beneath 12,000 feet or so because that is where the Cherokees (original moniker given to the Piper PA28 series) fly.  When the map turns blue flying airways becomes the norm for aircraft on instrument flight plans or VFR aircraft requesting flight following.

The morning’s flight plan which Dan, co-worker and first officer for the trip, put into the Aztec’s GTN750 Comm/Navigator was Great Exuma (MYEF) direct to the DUKKY intersection at 9,000 feet, then airway A555 to BTLER where we would join airway L463 across Providenciales  and on to Puerto Plata’s Gregoio Luperon International Airport (MDPP).   We received our clearance “as filed” from Nassau radio as we climbed to the east in the bright morning sun. Nassau handed us off to Miami who advised, “Altimeter setting 29.92 and maintain flight level 090.”

It didn’t register with us right away until Dan replied, “Altimeter 29.92 and Niner Thousand” to which Miami repeated to maintain flight level 090.  Another glance at the Jepp chart on the Ipad revealed the 3 letter code (QNE) denoting “International Standard Atmosphere.”  What does that mean to pilots?  Flying in QNE Class E airspace means flying in the flight levels.

Crossing into the flight levels.

Our next surprise came about 20 minutes later approaching the INDEE intersection when Miami asked us to estimate the time to the BTLER intersection.  A quick look on the GNS 750 indicated 41 minutes which Dan relayed to Center.  The friendly controller then informed us that due to our altitude we would be out of radar and radio coverage until BTLER.  In the meantime, if needed, we could ask airliners overhead to relay a message to Center.  So here we were, exploring the southern regions of the famous Bermuda Triangle, without the benefit of direct radio contact with civilization.  A thorough scan of the instruments seemed in order: engines synced, oil and fuel pressures in the green, manifold pressure steady and oil temperature looking good.  The trusty Lycomings were doing their job, the S-Tec was keeping us on altitude and course all that was left for Dan and me was to monitor our progress to BTLER.

After BTLER we established on the airway down to the Dominican Republic and were handed off to the Grand Turk controller as we passed over Providenciales, one of the fuel stops we had selected for the trip home.  As we travelled further to the south we noticed the clouds forming a solid undercast and thickening.  When we were handed off to Santo Domingo Center we waited for a break in the communications as everyone was speaking what I am guessing was Spanish.  Fortunately (for us) the controller did respond to our call in English.  The different languages made it easier for us as we really only had to pay close attention when we heard English and for a while, all the other aircraft on the frequency were speaking Spanish.

We were able to get current weather in Puerto Plata which indicated moderate rain.  So much for that “no significant weather” forecast we received on our departure from Great Exuma. Thankfully, with the Caribbean Jeppesen subscription on Foreflight we were able to prepare for the runway 8 instrument approach to the Gregorio Luperon International Airport.  As we descended below 4,000, the clouds parted somewhat and we could see the shoreline of the Dominican Republic.  Rather than fly the full instrument approach we were able to stay visual.  As we touched down on the 10,000 foot long runway another steady rain began.

Throughout the Caribbean beyond the Bahamas, we learned most airports don’t have an FBO as we know them.  Such was the case in Puerto Plata as the Dominican military controlled and staffed the airport.  We had contacted Servair to act as our “ground handler” for services.  They purchased our fuel from the military, arranged for some lunch catering, and expedited customs requirements for their fee.

Twenty Caribbean nations (of which Nevis is one) have formed an alliance called CARICOM https://caricomeapis.org/ through which we were required to file a passenger manifest at least one half hour before we arrived in Nevis.  Unlike the web portal for the US eAPIS, the CARICOM system requires the pilot to download an Excel spreadsheet, fill in the manifest, then upload the completed sheet back to the website.  While we were being serviced I was able to use Servair’s WiFi to accomplish the report.

After we ate our lunch and paid our bill (which was first presented in Dominican Pesos, worth about $.02 US so it was a really big number) we prepared to depart.  Though we had already filed our IFR flight plan from MDPP to Nevis (TKPN) using Fltplan.com, apparently it was unavailable to the tower controller.  Servair personnel volunteered to refile with the tower controllers on the field.

The rain had diminished to a sprinkle as we walked back onto the ramp and climbed into the Aztec.  After engine start, we checked in with the tower who informed us in English that the runway was closed due to a mishap but it should not take long for the incident to clear.  I was now glad for the overcast as the PA27’s interior would have soon reached an unbearable temperature had the sun been shining.  About 10 minutes later the tower called us up with our taxi instructions for departure.

After takeoff we climbed into the overcast as we were vectored over the rugged mountains on our way east to Punta Cana.  As we neared the popular resort, the clouds gave way to the spectacular sunshine for which Punta Cana is famous.  The map again turned blue as we turned towards Mayaquez on the island of Puerto Rico.  The San Juan Center controller cleared us directly to the JOSHE intersection then to TUUNA where we joined the G633 airway that would take us over St Croix, then on to St. Kitts and Nevis.

About 100 miles and a lot of blue map later we were handed over to Bradshaw tower on St Kitts as we approached the GABAR intersection.  “Report the boundary,” said the controller.  We had no idea what that meant so I keyed the mic and asked.  He said he meant the boundary for the Class E airspace he was controlling which in this case was GABAR.  Apparently we were once again in an area, though controlled, not within radar coverage.

500 years ago Columbus was sailing these waters.

Passing GABAR and cleared for the descent, we were out of the clouds for the most part and treated to some remarkable scenery as the mountainous islands stood up in marked contrast to the flat blue Caribbean Sea.  Bradshaw tower requested us to report abeam their runway then again when we had Nevis’s Vance Winkworth Amory International Airport in sight.  Nevis is a smaller island but is marked by the distinctive extinct volcano, Mt Nevis, for which the island is named.  Upon notification of “Airport in sight” Bradshaw handed us off to Amory tower.  There is a large natural monument (hill) off the approach end of runway 10 so we kept our distance as we turned base and final.

After landing we were met on the ramp by our ground handler, Omel Wilkin. She expertly helped us with luggage and whisked us through the customs desk.  After clearing customs we stepped outside and were greeted by other Sporty’s personnel who had arrived a day earlier by Citation jet.

Three days (one of which was enjoying the island of Great Exuma in the Bahamas), 14 flying hours, and approximately 1,950 nautical miles after leaving the frigid Ohio Valley, we were in a paradise surrounded by warm water, lush green land and very comfortable 80 degree temperatures.  We had flown over the same waters of which Columbus had sailed just 500 years ago.  We braved the infamous Bermuda Triangle (probably famous because of the amount of traffic there, not inherently dangerous).  General Aviation offers travel with no TSA lines; no sitting next to a too large for their seat passenger; no lines or baggage check; and every seat is first class!

Destination! Mt. Nevis in the background