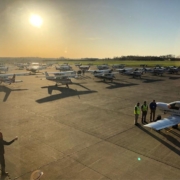 I had the distinct pleasure of representing Sporty’s at the 2018 National Intercollegiate Flying Association (NIFA) annual flight competition–SAFECON. With nearly 30 schools attending, the event was hosted this year by Indiana State University on its aviation campus at the Terre Haute Regional Airport (KHUF) the first week of May.  Sporty’s is a long-time NIFA member and sponsor. This year, Sporty’s demonstrated its support with a presence in the hangar that served as home base for the competing schools and with sponsorship of the “Top Two-Year School” award, won by Central Texas College.

NIFA traces its roots to early, post-World War I powered flight.  Young aviators, returning from the war to their collegiate studies, sought to expand upon and use their training and experience to further the cause of civil aviation. The first club was established in 1919 at Columbia University with 12 students. Similar clubs were born in the early days of flight at Harvard, Princeton, Yale, Lehigh, and other colleges and universities across the United States.

Nearly 80 institutions, across multiple regions, participate in NIFA today and utilize this forum for collegiate aviators to expand their studies and further their careers by participating in both competitive and non-competitive events, networking with industry and contemporaries, and applying themselves to go above and beyond the ordinary curriculum.  While the mission of NIFA is virtuous in all respects, it is the networking aspect that I find particularly intriguing.

Ground events include an IFR scenario in a Frasca AATD

The national SAFECON competition consists of ground-based events such as an aviation written exam, aircraft preflight, computer accuracy, aircraft recognition, and multiple simulator challenges.  Flying events include navigation (cross-country planning and execution), spot landings, and a message drop. There is a strong emphasis on safety, professionalism, and sportsmanship throughout the competition. Each event is judged by a panel of experts and industry representatives, all volunteering time away from their full-time occupations to support the competition–a nod to the supportive aviation community we enjoy.

At the final awards banquet concluding the week, pilots are recognized for individual performances, and team awards are provided for top schools. There is recognition for safety, performance, community involvement and both men’s and women’s achievements. The event is attended by coaches, judges, industry personnel and other dignitaries in the name of advancing the spirit of aviation.

Participation in NIFA events is voluntary. Some schools are able to secure sponsors to help defray team expenses, while other competitors are self-funded.  In all cases, participants are taking time away from their academic studies to better hone and benchmark their skills against some of the top collegiate aviators in the country.  This is also their opportunity to engage with like-minded individuals with whom they will be sharing flight decks and with industry representatives seeking to employ them as aspiring professionals.

Days at a typical NIFA event consist of moments and even hours of fierce competition and thoughtful preparation and study, but there is equal time when competitors are not participating in events and/or waiting out the inevitable weather delay. It is this unscripted time I believe is invaluable. NIFA is expert in creating an environment in which competitors must interact with opposing schools. The hangar is arranged so that flight teams have designated space, but always in close proximity to other teams. Industry exhibits are stationed in a pattern along the perimeter of the hangar so competitors may freely move to and fro to visit and speak to exhibitors and hear firsthand the latest pilot hiring news.

It is both refreshing and reassuring to see the young collegiate aviators thrive in this environment. Not only does the spirit of competition elicit inspiring performances, but equally important, the friendly interactions and new friendships forged affirm my confidence in humanity. Competitors, many undoubtedly top performers within their respective programs, are interested in improving and becoming better pilots and team members– good lessons for all pilots. Their interest in seizing the opportunity to extend a hand and make a personal introduction to future colleagues and employers demonstrates that the aviation industry is rich with talent and integrity.

The SAFECON champion for 2018 is Embry Riddle Aeronautical University – Prescott, followed by the University of North Dakota and Southern Illinois University. Congratulations!

Terre Haute Regional  Airport (KHUF,) located just 146 nm west/northwest of Sporty’s headquarters, made for a perfect light airplane travel mission on a decent spring afternoon for the outbound leg.  My aircraft for the mission was Sporty’s famous 1963 Aztec B that has graced many a cover of Sporty’s Pilot Shop Catalog, N702SP. My flight would take but an hour as opposed to the nearly four-hour drive Google had predicted (as if I needed to convince you of the value of flying).

A pesky scattered to broken layer at 4,000–6,000 feet dictated an IFR flight. After launching VFR with an IFR airborne clearance and a brief northbound vector clear of the Cincinnati Class B arrivals and departures, I was headed due west direct to HUF. The slight northerly vector departing the Cincinnati area also kept me clear of the Restricted (R-3401A) just west of Columbus, Indiana.

Approaching HUF, I expected to encounter activity related to the NIFA event, despite the absence of a NOTAM. Reference to the flight competition was relayed via the ATIS broadcast, but the professional tower controllers were working transient aircraft in and out without delay.  Gusty surface wind greeted me upon my arrival and would make for a challenging crosswind landing in the stubby Aztec.

If that weren’t enough, on short final for runway 23, I started to make out what appeared to be an army of fluorescent shirts standing just off the east side of the active runway along the touchdown zone–NIFA judges! Turns out, I had picked the perfect time between accuracy landing heats, and all attention was now on my airplane.

Aztec taxiing in at SAFECON 2018 in Terre Haute, IN

If they had numbers to hold up, I wasn’t able to see.  It wasn’t worth a 10, but I had the left main into the crosswind down first, followed by the right main with the longitudinal axis parallel to the runway centerline. I’ll call it a success, and the Aztec was well-recognized and photographed taxiing to the ramp.

The strong surface winds persisted throughout the remainder of the competition and for my Friday departure.  Additionally, the forecast included a chance of afternoon thunderstorms for my return to the Cincinnati, Ohio, area. The convective activity was slow to develop, but as forecast, began to ignite as I was making my preflight preparations.  After some careful consideration, conferring with several pilots in the FBO’s weather room, and evaluating multiple alternate airports and flight paths, I was on my way to Cincinnati.  Even if what began as scattered storms developed into a more well-defined line, it would likely be quick-moving and out of the way by early evening if I had to wait it out at another airport along the way.

IFR also would be necessary for the return leg as the same scattered to broken layer I had encountered outbound was present yet again.  The IFR status would also allow me to stay in contact with ATC continuously to receive updated weather advisories and to hear pilot reports of current conditions and alternate paths if a deviation became necessary.

The ADS-B weather I was receiving on my iPad and Garmin G500 was showing a line of storms becoming more widespread to the northwest of Cincinnati with each update.  Examining the ADS-B traffic headed that same way confirmed aircraft beginning to deviate toward the south.  One of many benefits of onboard weather is being able to strategize well ahead of the looming threat.  Some 50 miles from precipitation and nearly 80 miles from my destination, I was able to request an alternate flight route around the southside of Cincinnati airspace, where precipitation remained more scattered.

ATC seemed appreciative of the early request and even offered agreement on my requested route. While the dynamic weather situation continued to develop, I had good visibility in addition to ADS-B weather. This is a key takeaway from the spring afternoon flight. Absent the benefit of visibility to see the building weather, I likely would not have completed the mission at first attempt. The latency of onboard weather products has been clearly noted, and pilots would be wise to heed the warning. The only live weather display comes from your own eyes or from an on-board weather radar.

Digital weather products are delayed. The latency includes the total time between the actual occurrence of the phenomenon, the data collection, processing, transmittal, and the display or application of the information on the flight deck.  According to FAA Advisory Circular 00-63 (Use of Cockpit Displays of Digital Weather and Aeronautical Information), “…pilots must assume that data link weather information will always be a minimum of 7 to 8 minutes older than shown on the time stamp.”

The amount of total latency may significantly limit the use of information, especially in the case of developing thunderstorms.  Broad, long-range avoidance and planning is the real advantage–NOT short-range tactical decisions.  In the case of my return leg, the latency was most obvious when comparing what was being viewed out the window with what was being broadcast to the aircraft. Had I chosen to ignore my own eyes in favor of NEXRAD imagery for the shorter-range tactical avoidance, I easily could have flown into danger.

After what amounted to an extra 20 minutes or so of flying time for the safest weather avoidance route, I made an uneventful landing back at home base, well ahead of the approaching weather.  What I was seeing via the digital weather broadcasts confirmed what I was seeing with my own eyes.

A fun week of friendly aviation competition, capped off with two successful flights on the book ends–a fantastic start to the spring flying season.