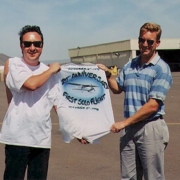 The memory: when I first soloed, on October 8th, 1978, the flight school I was attending did not do the cut-the-back-of-your-shirt-off thing for first solo flights. Over the years I felt as though I had missed out on a time-honored tradition! So, on the 20th anniversary of that first solo, I had my instrument flight instructor, Chris Shehi, help me re-create that flight—only this time with the shirt cutting!

I had a custom shirt airbrushed with an image of the C-150 I had originally soloed in (complete with tail number) and, after recreating the flight just as it had originally happened, Chris cut the back off for me.  The shirt is now framed and hanging in my home office.