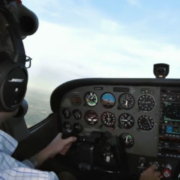 As a new student pilot, I was almost always too high and too fast on final approach (maybe I didn’t want to land and end all the fun). The result was that my instructor often had to coach me through both slowing down and going down. One day, in an attempt to help, he said something that sounded so simple, and yet was immensely confusing: “pitch for airspeed; power for altitude.”

That sounded exactly backwards to me. In a car, if you want to go faster, you step on the throttle. Why would it be different in an airplane? And won’t the airplane just climb if I pull back on the yoke?

Slow flight is a great way to learn the relationship between pitch and airspeed.

Little did I know that I had stumbled into one of the oldest arguments in aviation. I soon found out that different pilots had very different opinions on this subject, and debates were often quite heated. Fans of Wolfgang Langewiesche’s classic book Stick and Rudder cite chapter and verse to explain that airplanes are not cars. Navy pilots will tell you that if you ever want to land on an aircraft carrier at night, you’ll most definitely use “pitch for airspeed; power for altitude.” Glider pilots agree, pointing out that “power” isn’t an option for them and they manage to control airspeed rather precisely.

Not everyone agrees with this traditional approach. I’ve heard Air Force and airline pilots both argue for the opposite: Langewiesche may be right about Cubs in 1944, but in a jet you start a climb by pitching up and then managing the climb speed with the power lever(s).

Who is right? I generally side with the pitch for airspeed crowd. While it may sound counterintuitive at first, it’s actually quite simple after a few hours. Airplanes are stable, so if you trim for the right airspeed the airplane will want to stay there. You can try this yourself: while in level cruise, pull back gently on the yoke, then release it. The airplane will eventually find its original airspeed. This is helpful on an approach if your airspeed is perfect but you are slightly high. Simply reduce power to increase your rate of descent, and the airplane will stay at its trimmed airspeed.

The lightbulb moment for me was really when my instructor and I went to practice departure stalls. I quickly learned that my instinct had to be to lower the nose (more specifically, reduce angle of attack) in that situation. Since an airplane was already using full power, “power for airspeed” was not an option. It proved to me that airspeed could be controlled by pitch.

But clearly things aren’t quite that simple. Consider the departure stall scenario again. When you reduce pitch, the airspeed will increase, but your altitude will probably decrease as well (or at least, the rate of climb will go down). That suggests that maybe the old saying doesn’t tell the whole story.

You’re level and slow. Should you pitch down or add power?

Here’s a more practical example, one I’ve encountered many times when flying to busy airports. If ATC tells you to maintain 3000 feet, then later asks for “maximum forward speed,” you’re not going to push the nose over to accelerate. Instead, you’ll likely increase power first, then slowly add forward pressure on the yoke to stay at 3000 feet. As you do this, the airplane will accelerate.

As you gain experience and fly higher performance airplanes, things get even more complicated. First, you’ll often have to balance multiple criteria: “cross GAVNN at and maintain 12,000, slow to 160 knots at GAVNN.” In order to satisfy both parts of that clearance, you’ll have to play around with both the power and the pitch (or sink rate) in order to fly as fast as you can while descending, but still slow down before you cross the fix.

Flight directors complicate things even more. If you’re flying an ILS on a G1000, for example, the magenta flight director bars will tell you how to stay perfectly on the glideslope. So if you’re too low, the bars will suggest you pitch up to recapture the correct descent angle. It works beautifully, but isn’t that pitching for altitude? It sure is, and a wise pilot will add a touch of power to compensate for the lost airspeed. Since the flight director doesn’t control the throttle, the only way it can suggest you fly the correct glide path is with attitude.

So what’s the answer? Is it pitch or power that determines airspeed? The answer is obviously both! As these examples show, the key skill for student pilots to learn is how to use all available tools to fly the correct course and altitude while maintaining the proper airspeed. To do this smoothly and safely will require coordinated use of both power and pitch. A truly great pilot understands the tradeoffs and has an innate feel for the relationship between pitch and power. High on final but on glide path? Reduce power, not pitch. High on final and slow? Leave the power alone and pitch down.

Instead of focusing on a simplistic rule of thumb, go do some slow flight and get a feel for how these scenarios work in the real world. And save the arguing for your next rainy day hangar flying session.