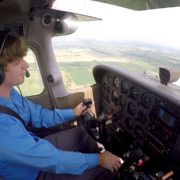 The phrasing for the slow flight skill element has been modified to eliminate the specific speed guidance of 5-10 knots above stall speed to read as follows:

Establish and maintain an airspeed at which any further increase in angle of attack, increase in load factor, or reduction in power, would result in a stall warning (e.g., aircraft buffet, stall horn, etc.).

Private Pilot – Airplane ACS, Power-Off & Power-On Stalls. FAA has added a requirement for the applicant to acknowledge the initial indication of an impending stall. The pilot could meet this requirement by simply stating “stall warning” or “buffet.” The element now reads:

Acknowledge cues of the impending stall and then recover promptly after a full stall has occurred.

The FAA emphasizes that as the pilot transitions from the initial indication and acknowledgement of the impending stall, the flight control applications should be smooth and coordinated – not abrupt or rushed – until a full stall is reached and throughout the stall recovery.

Commercial Pilot – Airplane ACS, Power-Off & Power-On Stalls. The FAA has maintained the requirement for stall recovery procedures to be executed at the first indication of an impending stall (e.g., buffet, stall horn, etc.); however, has modified the skill element as shown below to require the applicant to acknowledge the impending stall cues. The element now reads:

Acknowledge the cues and recover promptly at the first indication of an impending stall (e.g., aircraft buffet, stall horn, etc.).

Current versions of the ACS are available at: