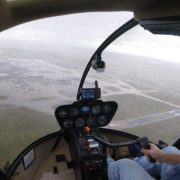 Contributor David Booth shares a story of an eventful cross-country flight in a Robinson R44 as a student pilot in Melbourne, Australia – Ed.

It started out fine, but I was forced to make adjustments

It all started out fine. An hour or so planning a straight forward solo cross-country was time well spent.

The plan was to leave from Essendon, up to Kalkallo, then follow the Hume Highway to Wallan then Broadford. Make a right turn and head for Flowerdale, Glenburn and then turn south toward Yarra Glen. Line up with the Lilydale runway for a straight in approach and make a nice smooth landing “clear and parallel” on the grass. Catch a few breaths then pick up and head to the Plenty NDB and onward to Essendon.

The weather was partly cloudy with some drizzle, but nothing too threatening.

After a pre-flight briefing with Kyran, and a quick review of procedures, radio calls, weather and the route, it was off to the Robinson R44 helicopter to get started. Conduct the daily pre-flight inspection, test the fuel, start her up and perform the remaining pre-flight checks. All good so far.

“Essendon Ground this is helicopter Whiskey Tango Tango at hangar 7 apron for Kalkallo with Charlie. Request taxi and airways clearance from tower helipad”.

“Whiskey Tango Tango unable to give you Kalkallo. Cleared Tower Helipad to Doncaster not above one-thousand, five-hundred. Taxi and hold short of helipad”

I take off, climb to one-thousand, four-hundred and head towards Doncaster. After reaching Doncaster, I turn left heading over Eltham to the Water Tank. Follow the power lines heading northwest and finally spot the Kalkallo communications tower in the distance. Big deep breath – I am back on track. I check the flight plan and chart and start up the Hume Highway. I fly over Wallan, through the Kilmore gap (a little drizzly but not too bad) and then look for Broadford. There it is!

I make the right turn at Broadford, overfly the Motorcycle Centre, get my bearings and head for Strath’s creek en-route to Flowerdale. I complete the CLEAROFF Checklist: Compass – Correct; Log it – Write the time; Engine – Lights, temps and pressures all good; Altitude – Three Thousand as planned; Radio – Frequency correct and transponder VFR; Orientation – Heading in the right general direction; Fuel – Plenty; Forced Landing – Lots of farms below. Checklist complete.

I glance down at the instrument panel about two minutes later and…WARNING LIGHT. Why is it on?

After a quick mental review of the auxiliary fuel pump, I check the circuit breakers. Sure enough, one of them has popped. I attempt a single reset and it pops out immediately. I suppose the auxiliary fuel pump has failed. Decision time: do I fly to Lilydale or do I do I make a 180 degree turn and head home quickly?

I decide to retreat.  After all this is my first emergency and I want to affect a good outcome.

I fly back to Broadford, south down the Hume toward Kalkallo. As I approach Kalkallo, I contact Essendon Tower to request clearance to the Helipad.

“Whiskey Tango Tango remain outside class Charlie airspace. Will get back to you.”

“Whiskey Tango Tango we are going to bring you in via Melbourne. Contact Melbourne Tower on 120.5 for clearance”.

Melbourne Tower? He can’t mean Tullamarine – Melbourne International Airport? I’m just a student pilot in a tiny R44. These aircraft don’t fly into Tullamarine. Surely, he can’t be serious. But he is (and don’t call him Surley)!

After being asked to hold outside class Charlie airspace, I was eventually directed to track direct to Melbourne, not above one-thousand, five-hundred. Through the drizzling rain, I headed towards the Tullamarine control tower.

“Whiskey Tango Tango track to the 27 threshold. Remain at one-thousand, five-hundred. Contact Essendon Tower overhead. Be aware there is a Jetstar Boeing 737 about to land. Be careful of jetwash.”

Jetwash? Where wasn’t in the flight manual.

As instructed, I proceeded over the 27 threshold just behind a JetStar Boeing 737 that landed from my left to right. I’m poised to hold my R44 steady as the jetwash hits. Thankfully, it wasn’t much more than a small amount of turbulence.

I proceed to Essendon and into the Tower pad followed by a short taxi to the hangar seven apron. After completing the shutdown procedure, I head inside for a much-needed break.

Wow, I survived my first emergency and had the opportunity to fly over the busy Tullamarine airport – not bad for a trainee.

What did I learn?