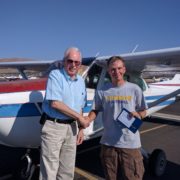 When I accomplished my solo, the wind was a direct crosswind at 10 knots – maybe a little much for my first solo. I had delayed getting my medical for some time and finally had it completed. I think I had 28 hours in my precious logbook.

I worked extra to pay for my flight lessons

I’m not a wealthy man but any means. Rich yes!! Wealthy, not so much.  Like many student pilots, I had some gaps in my training as I would work after hours to acquire money for more time in the sky. So on this great day my instructor gets in the airplane and asked me what my plan was for the day. I was hoping to solo so my wife came to the airport in case this really was “the day”. I told him I would have liked to get my first solo in if the wind was better. He laughed and said where we live this is good wind.

We took off to do some touch-and-go landings. After the third landing, and with my instructor not saying a word, I asked him how I was doing. His response was “you are extremely boring me.” I laughed and told him if he was so bored I would just let him out on the next trip around.  I came around the pattern for another and greased it.  Sure enough, I pulled up to the FBO and my instructor jokingly commented “let me out before you kill me.” I laughed and responded with a casual, “as you wish,” trying to mask my nervousness.

After my first solo takeoff, I knew it was all up to me

I dreamed of this moment since I had been six years old. I lived, breathed, and dreamed aviation all my life.  The moment was here and it was staring me in the face.  No matter who you are or how much you want to fly, there is a moment after completing the run-up for the first time on your own that causes you to take pause and consider if you REALLY want to do this and if you’re REALLY up to the challenge.  After all, nobody is here to save me if I screw up.

I sat for a moment before taxing to the active and resolved that once I took off, I had no choice but to get myself down. So I throttled up and after a very short roll in an airplane that was suddenly much quieter and lighter, I was in the air.

It wasn’t until downwind when the reality of the situation hit me. I looked over to the empty seat next to me and reflected “What the heck are you doing Dana – this is crazy.” I came down final and greased my first landing. After three more uneventful laps around the pattern, I reasoned that I had better stop pushing my luck.  It was starting to get gusty and I was happy with what I had accomplished.

I taxied to the hangar and put the aircraft away.  My wife came running to greet me with a hug and said I was either the bravest man she knows (or the craziest).  I found my instructor in the maintenance hangar arm-deep in a Piper cowling.  He was smiling (a rare occurrence) and asked me how it went.  I responded with the obvious – I’m here so it went well.

When he asked why I didn’t fly longer and I responded with how I didn’t want to push my luck, he stopped in his tracks.  With a serious look in his eye he shared:

In aviation we have skills.  If you have skills, you have no need for luck.  Never get yourself in a situation where you need luck!

We retreated to the hangar where I had my shirt tail clipped, pictures taken, and the whole nine yards. My shirt tail is now pinned on the ceiling of the FBO – a very proud feeling.

I have since earned my ticket by nailing my checkride with plenty of compliments from my DPE.  He said I passed all my maneuvers to commercial standards and that it had been years since he had a applicant perform as well on the oral.  He remarked that I was a realistic, practical person and will be a great pilot.

I think I floated home instead of flying! I owe it all to my great instructor!  Thank you.