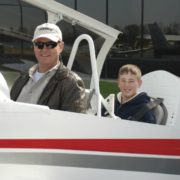 One of the great traditions in aviation is, soon after earning your pilot’s license, to take a friend or family member up for a flight. It’s a fun way to exercise your pilot-in-command privileges, gain confidence and introduce someone new to aviation. Such a flight should definitely be on your to-do list, but it should also be carefully planned.

Taking a kid for his first flight? Then you’ll definitely want to be thoughtful.

Planning is particularly important if you’re taking someone up who has never been in a small airplane before – an intro flight. Without careful consideration, what should be a fun event can turn unpleasant in a hurry. Instead of welcoming a new friend into the world of aviation, you can scare them off forever.

Unfortunately, this happens all too often, as pilots fail to consider the unique concerns and expectations of non-pilots. You may have even experienced one of these nightmare intro flights yourself.

Since sometimes the best way to learn what we should do is by understanding what we shouldn’t do, let’s consider five major mistakes. With tongue planted firmly in cheek, here is how to give a truly terrible introductory flight:

1. Take off in the late afternoon on a hot day. Flying can be fun any time of day, but mornings really are the best, particularly if you’re flying in the summer. By late afternoon, the bumps are usually worst (due to both thermals and wind), the visibility is often lower, and flying generally just isn’t as fun. A hot, bouncy day at low altitude is a surefire way to sour someone on general aviation.

2. Wait for a cloudy, gusty day. In addition to thermals, gusty winds are another guaranteed way to make a flight uncomfortable. Add in some gray clouds and even a little rain and you can ruin the view too. The point is, only you decide when the time is right to go flying. Just because the flight was scheduled for Saturday doesn’t mean Mother Nature will necessarily cooperate. Be patient.

3. Talk about why airplanes crash. This mistake is often the result of good intentions, as pilots attempt to reassure passengers how safe airplanes can be. The safety part is fine, just make sure you don’t stray into the NTSB accident files too much (“we check the control cables because if there’s a problem we could spin out of control and die”). A new pilot wants to hear about the magic of flight, not the worst case scenarios, so keep it positive.

4. Do steep turns and stalls. This may be the cardinal sin of intro flights, and is responsible for far too many horror stories. Your job is to provide a calm, inspiring trip through the skies, not create an airborne thrill ride. Resist the urge to say “watch this” and start cranking and banking. Instead of impressing your passenger, you’ll probably scare them instead.

5. Talk the entire flight. Enthusiasm is great, and you should definitely explain what you’re doing as you fly. Most passengers love to learn about the controls, the instruments and what the maps says. But don’t go overboard; you’re not there to be a flight instructor and you can easily overwhelm (or bore) a non-pilot with too much technical talk.

All kidding aside, your job on an intro flight is to be an ambassador for aviation, not an airshow performer. Can you fly on an overcast day at 5pm with a gusty crosswind? Sure, but that doesn’t mean it’s the right time for a new passenger’s first flight.

While it’s not found in the Airman Certification Standards anywhere, learning how to manage passenger comfort is a critical skill for a Private Pilot. If you’re a flight instructor, these five lessons are even more essential. Flying with passengers is an awesome responsibility. Take that responsibility very seriously, and make each of your intro flights memorable – for the right reasons.