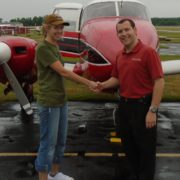 Back in July of 2013, the FAA implemented a new set of rules for the multiengine ATP. July, 2014, was the last month to take the old FAA knowledge test without having to take the then new ATP-CTP course.

Prior to 2014, there were typically 6-8000 ATP written tests given each year. The first half of 2014 saw a huge increase in the number of tests given with over 27,000 pilots taking the old version of the test before the July 31st deadline. After the deadline, there was a sharp drop off in testing with 60 pilots taking the new version of the test during the rest of the year.

While the FAA statistics don’t break down the months, the calls to our flight school would indicate that the majority of the pilots we spoke to, had taken the test during July. I say this because the end of July, 2016, is when written exams taken in July, 2014, would expire and a lot of pilots were looking to upgrade their certificates under the old testing system.

While the statistics won’t be out for several months, it will be interesting to compare the number of Multiengine ATP certificates issued during 2016 to other years. I don’t believe that it will be anywhere near 27,000 but I suspect that it will be double or triple the average of previous years.

Our flight school saw over a 1000% increase in the number of clients coming here to prepare for and take their ATP practical exam when compared to a typical year prior to the rule change. During June and July, we had to turn potential clients away due to a lack of aircraft and instructor capacity as did many other flight schools. Planning for and timing 100 hour inspections was a challenge but our excellent maintenance crew did a great job on both scheduled maintenance and the inevitable unplanned repairs.

June was the busiest month ever on our Piper Aztec. July was also busy but there was a break in the middle of the month for a 100 hour/annual inspection that was due.

Our last ATP client under the old testing rules finished his checkride on Saturday, July 30th, after some weather delays earlier in the week and an unexpected primary flight display failure that occurred on Friday (Thank you Aspen Avionics, FedEx, and Cincinnati Avionics for fixing that issue by Saturday morning), he left with his new certificate in hand.

Now that we have reached the month of August, we are servicing a backlog of non-ATP multiengine clients that did not have a July 31st deadline.

Moving forward, we expect to see a return to a slower pace of ATP clients but not as slow as it was before the ATP rules were changed. Let’s face it, the ATP is now a requirement for the right seat of an airliner and it is likely that more competitive pilots will opt to obtain the ATP before applying.

Foreign pilots that want a US ATP certificate also like to book the ATP-CTP with our ABX Airlines partners then spend an extra few days getting to know the Aztec and passing the ATP practical exam so that they can return to their home country with an FAA ATP certificate. Can you blame them?