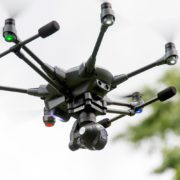 In August, 2016, new operational rules became effective for routine, commercial use of small, unmanned aircraft systems (UAS) or “drones.”  It’s known as Part 107 and is viewed as an early pathway to fully integrating drones into the national airspace. The much anticipated rulemaking has been applauded by many industry trade groups and helps provide structure to what has been a somewhat chaotic environment as regulations attempt to catch up to the rapid technological advancements and accessibility of small drones.

Part 107 does not apply to recreational drone use

For those operating a drone for fun, Part 107 does not apply. You do not need permission from the FAA to fly, but you do have to be at least 13 years of age and also a U.S. citizen or permanent resident. You must register and label your drone if it weighs more than .55 pounds. And you are required to abide by these minimum safety practices:

Additional best practices for recreational drone use are available from KnowBeforeYouFly.org.

Prior to 107, drone operators had to seek exemptions

In 2012, Congress passed the FAA Modernization and Reform Act (Public Law 112-95). Section 333 of the law directed the Secretary of Transportation to determine whether UAS operations posing the least amount of public risk and no threat to national security could safely be operated in the national airspace system (NAS) and, if so, to establish requirements for the safe operation of these systems. The FAA has done so, in part, with the introduction of Part 107.

Prior to Part 107, anyone intending to utilize a drone for a commercial purpose had to seek an exemption from Section 333 which have been issued by FAA on a case by case basis. While there were many challenges associated with the exemption process, the number of requests exploded in 2014-2015 as the industry began garnering attention from entrepreneurs, start-ups, and mass-consumer outlets. It also sought to discourage illegal use of drones in commercial use which was, and still remains, rampant.

The volume of exemption requests was such that FAA opted to streamline the exemption process and began issuing blanket authorizations for use under certain conditions, but the backlog of requests still required months to be processed. Part 333 exemptions also required the operator to possess a traditional manned pilot license – sport, private, commercial, etc. To date, more than 5,500 Part 333 exemptions have been granted.

Today, most Part 333 exemption holders and new commercial operators will now be able to operate under Part 107.

After completion of the knowledge test, you must apply for the remote operator certificate via the FAA’s online application system (IACRA). A permanent certificate, valid for two years, will be mailed once the internal processing and TSA vetting is complete. Certificate holders will be required to pass a recurrent knowledge test every two years. There are a variety of resources available to prepare for the FAA knowledge test including Sporty’s Drone Study Buddy. An endorsement to take the test is not required and results are valid for 24 calendar months.

There is no direct cost incurred for remote pilot certification for existing pilots. Pilots must pass a recurrent online training course every two years.

Your drone must always be close enough to see and react

Once you’ve obtained the necessary pilot certification to operate your small drone in commercial operations, ensure it’s been registered. The operator should always avoid manned aircraft and never operate in a careless or reckless manner. You must keep your drone within sight. Alternatively, if you use First Person View or similar technology, you must have a visual observer always keep your aircraft within sight. An important note is that even if using a visual observer, you must still keep your drone close enough to be able to see it if something unexpected happens. Neither you nor a visual observer can be responsible for more than one unmanned aircraft operation at a time.

You can fly during daylight or in twilight (30 minutes before sunrise to 30 minutes after sunset) with appropriate anti-collision lighting. Minimum weather visibility is three miles from your control station. The maximum allowable altitude is 400 feet above the ground, and higher as long as your drone remains within 400 feet of a structure. The maximum speed is 100 mph (87 knots).

You can’t fly a small UAS over anyone who is not directly participating in the operation, under a covered structure, or inside a covered stationary vehicle. No operations from a moving vehicle are allowed unless you are flying over a sparsely populated area.

Many Part 107 limitations are waivable with approval

You can carry an external load if it is securely attached and does not adversely affect the flight characteristics or controllability of the aircraft. You may also transport property for compensation or hire within state boundaries provided the drone – including its attached systems, payload and cargo – weighs less than 55 pounds total and you obey the other flight rules.

Part 107 includes the option to apply for a certificate of waiver, which allows for a small UAS operation to deviate from certain operating rules if the FAA finds that the proposed operation can be performed safely. Waivable sections of part 107 include:

A drone operator is required to report an accident to the FAA within 10 days if it results in a serious injury to any person or any loss of consciousness or if damage to any property, other than the drone, if the cost is greater than $500 to repair or replace the property (whichever is lower).

Determining whether you’re subject to Part 107 as a commercial drone operator versus flying for fun, which is not subject to Part 107, comes down to the purpose of your flight.  Recreational or hobby use is flying for enjoyment and not for work, business purposes, or for compensation or hire. In the FAA’s Interpretation of the Special Rule for Model Aircraft, it relied on the ordinary, dictionary definition of these terms. UAS use for hobby is a “pursuit outside one’s regular occupation engaged in especially for relaxation.” UAS use for recreation is “refreshment of strength and spirits after work; a means of refreshment or division.”

If in doubt, consider erring on the side of caution and take the steps to obtain your Remote Pilot Certificate. You’re able to use the guidance of Part 107 even if your drone flight is for recreational purposes. And while the FAA is first to admit that the availability of resources limits its ability to pursue all illegal drone use, there are numerous stories of severe penalties being levied against those who openly flaunt the law. Besides, what could be more fun than showing off a new “drone license.”