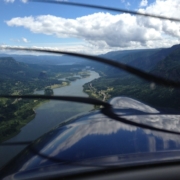 In 1998 my Christmas present from my wife Rose Ann was a Magellan hand-held GPS.  It was a navigational miracle in a box not much bigger than the flip phones that were popular at the time.  Its database included all the navigational beacons (VORs & ADFs) and public use airports in the entire country.  Christmas, 1998 introduced me to the world of “Direct To” navigation.

Almost immediately, my ability to steer the Cherokee to a point on the globe by dialing in two VORs, rotating the OBSs to the appropriate radials and watching as the needles of each Course Deviation Indicator creep towards their center, went from pretty darn good to forgotten.  All I now had to do was climb into my trusty steed, tell the box where I wanted to go by pressing a few keys, then sit back and watch while making sure the monochromatic airplane icon on the monochromatic screen stayed closely aligned to the monochromatic depicted course.  My back up was another four AA batteries in my pocket.  My only worry was if the weather would change from the briefing I received from Flight Service before I took off.

Now, even if the airplane doesn’t have a panel mounted GPS, innovations like the iPad, Foreflight and Stratus GPS/ADS-B receiver put real time position (to within a meter) and near real time weather at my disposal – all in living color.  I can accurately plot a great circle course from anywhere to anywhere flying the absolutely shortest distance, requiring the least time and fuel to get there. If something happens to the iPad, my iPhone will work as a backup for both the iPad and Stratus.  A far cry from the days when I used to lay out Sectional Charts on the floor plotting my course from recognizable waypoint to waypoint until I got there.  I became a “Direct To” kind of guy.

Aurora, OR to Batavia, OH

In June of 2013 I was tasked with flying Sporty’s new sweepstakes airplane, then an RV-12, N237VA, from Van’s Aircraft in Aurora Oregon (KUAO) back home to Sporty’s (I69).  My first instinct was to plot in GPS Direct and pick up some airports every two or three hours to land, fuel (both myself and the airplane), check fluids (again both for myself and the airplane), then launch again.  I’d stop somewhere about half way to spend the night and in about 14 hours flying time (two, seven hour days) I would be back home.  Easy Peezy.

But a closer look at the course line over parts of Idaho, Montana and Wyoming revealed very rough terrain including mountains over 12,000 feet with ominous names like “Dead Indian Peak” and the like.  Along that route is vast areas of desert and mountains and more important – no people.

I watched an episode of Survivorman on Discovery Channel where Les Stroud was out in the desert and made a dead fall trap out of two flat rocks, a stick and his shoelaces.  He baited his trap with a bit of cracker to lure a desert rat.  When the rat came to eat the cracker he pulled the stick tied to his shoelace making the top rock fall killing the rat.  The rat’s blood and meat was consumed to survive the day.  Should my one and only rubber band (engine) on the airplane break, or I was forced down in one of these areas for other reasons, lacking Les’s survivor skills, I would probably be a goner.  I concluded the hills and hollers of my Kentucky homeland offered no preparation for dealing with an emergency landing in the Wild, Wild West.

I selected a more circuitous route.  Rather than rely on my aircraft’s GPS, I chose the other kind of IFR navigation.  I followed rivers, roads and railroads through the mountains until I got to the more inhabited and flatter Midwest where, trust me, after spending hours in the mountains everything looks like an airport.  Instead of flying over miles and miles of nothing but miles and miles I started my journey northwest from Aurora until I was over the Columbia River where I flew up its very scenic gorge.

Following the river kept me north of restricted areas west of Camp Pendleton where I picked up my second leg of this IFR trip.  I follow route Interstate 84.  By doing a simple google search before the trip I learned that the highest point of I-84 was only about 4,200 feet MSL and, having seen the Disney movie Planes, I confirmed there were no tunnels. The Interstate took me to Ogdon, UT where I landed and spent the night.

The next morning I continued to follow I-84 through Weber Canyon out of the Salt Lake City area to its terminus in nearby Echo, UT.  There I picked up Interstate 80 as I continued the “I Follow Roads”part of my journey.  I followed I 80 through the high desert of Wyoming.  Although flatter, here the road reaches its highest elevation of nearly 8,650 ft.  At Cheyenne, WY I exited the mountains but continued to follow the Interstate through Nebraska and Iowa tuning Southeast at Davenport where I crossed Illinois and Indiana GPS direct.

My route was only a couple hundred miles further than flying direct.  It added a couple hours to my flight time calling for an additional 10 gallons of fuel.  But for two hours of my life and $50 worth of Avgas, I felt much safer as I always had a landing site – with people – within my glide range.

I (F)follow (R)rails is a handy way of navigating the Midwest.  Due to the layout of sections of land, the roads tend to run only east and west or north and south.  Railroads were largely built in straight lines to connect towns.  As there are fewer of them, a hapless pilot is less likely to follow the wrong one.  Probably the most famous railroad pilotage occurs during the Fisk arrival to the Experimental Aircraft Association’s Airventure each summer in Oshkosh, WI.  Arriving aircraft are to find the town of Ripon, WI, follow the tracks to Fisk then on to Whitman Field (KOSH).

I have to admit that I like the gadgets as much as anyone, but sometimes flying this version of IFR just makes more sense.