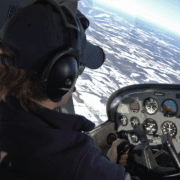 As the season transitions from fall to winter and the temperature is consistently below freezing, unique challenges are presented to pilots. Flight training doesn’t need to stop in the winter though; in fact the colder months provide some great opportunities to expand your knowledge on weather and aircraft operations in less than ideal conditions. There are other benefits too, including improved aircraft performance and nearly unlimited visibility on clear days.

Here are some winter weather tips to consider as the temperature gets colder: