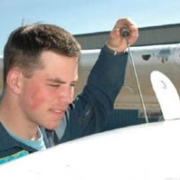 You have dreamed of this day for months.  Through all the study for the knowledge test.  Through that tenuous first flying lesson as you observed the airplane’s array of buttons, switches, knobs and dials making you wonder if you could ever make sense of it all.  But you did.  Soon you could interpret the instruments, you developed a “feel” for when the airplane was ready to fly on the takeoff roll.  After hours of maintaining altitude, turns to a heading, turns around a point, and stalls, you began to “feel” how airplanes fly and how airplanes “feel” when they’re about to quit flying on landing.

You passed your knowledge test, your medical certification and your check ride.  You have your temporary pilot certificate, medical and state-issued photo identification in your pocket and it’s now time to show off by taking a spouse, friend, parent or child for a ride.  The next hour will be memorable – for you and your passenger – the question is how it will be remembered?  A fun time and a great way to get from point A to point B, or a terror never to be repeated.

Begin at the Beginning

Every flight begins with planning including a weather briefing and preflight inspection.  These phases, however, may serve to provide opportunities to plant the seeds of doubt in your first time passengers.  Aeronautical charts might resemble other maps they have seen but have big spaces marked off as “Prohibited Area”, “Restricted Area” or “Military Operations Areas”  along with markings for Class B, C and D airspace and indications where Class E transitions to Class G. Your passengers may be apprehensive about these and quietly wonder if they will be shot down for getting too close.  Your briefing may include predictions of thunderstorms, icing and turbulence but far from your route or time of flight.

As pilots, we know to conduct a thorough preflight inspection of the airplane, but your passengers probably haven’t looked over their car that thoroughly since they bought it and have never had to add any oil between changes.  “I guess the darn thing was junk because he had to fill it up with oil even before we took off” is a logical viewpoint of a casual observer.  Therefore it is best to conduct the preflight before bringing your passengers out to the airplane and then just conduct an abbreviated walk around (wings on, propeller on, tires on) prior to boarding.

The word “stall” means only one thing to most people – the thing has quit running.  Aerodynamic stalls are a maneuver we all practiced many, many times on our way to our certificates and we may want to show off what we have learned.   Don’t even try to explain to your passengers how an airplane that has “quit flying” can be a good thing while the airplane is in the air.  What may seem to you as a normal buffet followed by the nose dropping may be interpreted by passengers as “We were just going along and then the darn thing dropped out from under us!  You can bet your bottom dollar, I’m never getting in one of those little darn things again.” They will surely relate this experience at the office water cooler and every party they attend hereafter.

“Pulling some Gs” is another thing we all got used to during our training.  We learned that a 60 degree bank coordinated turn will make a 200 pounder feel like they weigh 400.  We also learned what weightlessness feels like either during an aggressive nose over or turbulence.  Although we have gotten use to the sensations, rest assured your 2-G maneuver will turn into “We were just flying along and all of a sudden he made this turn and – I swear – there was so much force that it pulled the snot right out of my nose!  I expected the wings to break any minute.  I’ll tell you one thing, you will never catch me in one of those darn things again.”

Flying airplanes is safest when we keep then towards the middle and away from the edges of the sky.  The edges are marked by things like antennae, buildings, trees, dirt and rocks.  Unfortunately, the farther we fly from the edges, the less likely we are to get noticed when flying over our friends’ houses.  So there is the temptation to fly low.  We get an enhanced perception of speed, we get noticed by our neighbors, and it’s fun to fly a strafing run through the neighborhood using our right thumb to activate an imaginary machine gun to take out enemy cars, bicycles and boats.  That is…until you look over at your passenger, sweating like James Bond in Fort Knox.

Tomorrow they’ll be saying, “We were flying along and all of a sudden, we were diving straight towards the house.  He leveled off barely – and I mean barely in the nick of time.  I thought we were going to hit my chimney. Then, just as quick he pulled up so hard, it drained all the blood from my head.  I could tell it affected him too because he had this grin – this strange grin like a guy about ready to pass out.  I prayed we would land soon and we did.  I got lucky that time but I’ll be darned if you ever catch me in one of those darn things again!”

This is a personal article for me because I was the pilot in each of those scenarios.  I thought I was giving passengers a ride of a lifetime but it turned out to be the ride of their lifetime because it caused them to swear off flying in anything with propellers.  They didn’t tell me but they told their friends and co-workers.  These days I get to the airport and do my preflight before my passengers get there, or while they are still inside.  I make sure any squawks are addressed before I bring them out to the plane.  I do explain some procedures (such as the run-up) and reassure them everything checks out.  I explain that I need to attend to business during the takeoff and landing phase but will be happy to chat about our flight and answer questions during cruise.  Unless absolutely necessary I try to limit my bank angles to 15 degrees and maneuver so as to minimize the G forces.  Finally, even if they ask to buzz the neighborhood I tell passengers the FAA limits how close we can fly to people or their property and 1,000 feet is close enough.  I want them (and me) to be safe because no one has ever had a collision with the sky.

So enjoy your certificate, take friends and family along for rides, have fun, enhance your business, but most importantly: be safe y’all.