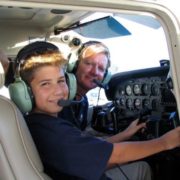 Flying is simply too good to keep to ourselves. Whether it’s a friend, family member or neighbor, bringing a passenger along is a great way to make your next $100 hamburger flight more fun. It’s also a wonderful way to welcome a new person into the amazing world of aviation.

Flying a young person? It’s especially important to watch what you say.

But with that fun comes some responsibility. For most non-pilots, it’s a big step to go flying in a general aviation airplane – filled with excitement but also fear. We need to respect that, and do everything possible to make flying less stressful. That means flying in good weather, being smooth on the controls and landing as soon as it’s not fun.

Sometimes, though, it’s the little things that matter most. A great example is the words we use in the cockpit. Talking is a great way to dispel some fears for a new flyer, so I make it a point to discuss some of the most commonly asked questions before and during a flight. But be careful here: casual statements can have a powerful effect if you’re not thinking.

Here are five things you shouldn’t say in the cockpit when you’re flying with passengers. Trust me, I learned these the hard way.

When it comes to flying with passengers, the best advice is to be boring. Simply leaving the ground and seeing the world from another perspective is exciting enough for most non-pilots; there’s no need to push the envelope or add stress.

In other words, don’t be like the pilots in Monty Python:

Any mistakes you’ve learned the hard way? Add a comment below.