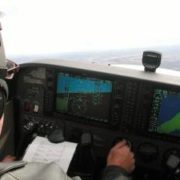 Twas the day after Christmas and snow covered the land.

We needed to put our toes in some water, our butts in some sand.

We drove to the airport, the plane was pre-heated,

Our luggage was light, no heavy clothes would be needed.

We shoveled the drift from in front of the hangar door

Pulled out the Skylane, then shoveled some more.

We made three paths to the taxiway through the accumulated snows.

Two for the main gear, and one for the nose.

We closed the hangar door and put our coats in the back seat.

We wouldn’t need them where we’re going, trading cold for some heat.

Gave the engine a little extra prime on this cold winter’s morning.

Opened my window and yelled “Clear!” the familiar pre-start warning.

The starter engaged the engine started to turn,

Had I primed it enough?  I was eager to learn.

After a few revolutions the engine came to life

We had oil pressure and I nodded to my wife.

The cabin still cold, you could see the breath from our mouth.

But soon we would be warm ‘cause we were heading south.

The packed snow on the taxiway made the brakes ineffective so

The pre-takeoff checks were completed on the go.

The winds were variable in the dawn’s early light

No one was in the pattern everything looked alright.

Yes the temperature was cold but the sky, well, sky blue

We made the radio call “This is 67Lima departing runway two two.”

Soft field technique is needed when the runway has snow.

One good thing about the cold? The airplane’s performance is more

Soon we were flying on a heading of two one four.

“Departure” I radioed out of the pattern area was my timing

The controller acknowledged my radio call with this beseech

“Radar Contact five south of the airport you are cleared as filed to Panama Beach.”

The auto pilot held the Nav needle steady to KECP

Soon the white land below gave way to brown and then green.

No TSA, no orange barrels, no cramped seat in row 17.

On the trip I got a whole pack of peanuts and a ham sandwich, this is the life

Served up by the world’s best flight attendant, my beautiful wife.

So a half day from freezing we sit in the sand,

And gaze at the waves breaking, a cold drink in our hand.

I ponder the miracle that is modern GA

I take the time to count my blessings, which are many this day.

From all of us at Sporty’s we wish you a HAPPY NEW YEAR!

May it be prosperous to all, filled with happiness not fear

As I ponder my flight plan and wish our friends all the best,

Now do I head north back to Cincy – or south to Key West?