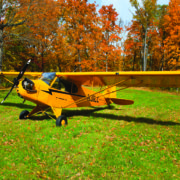 Incorporated into every pilot certificate is the Practical Test Standards (PTS) mandated Soft Field Takeoff and Landing.  Unfortunately, for many students, this simple PTS item can often be the source of apprehension and stress during their training and checkride.  Most of this training anxiety is generally based in the unknown or unfamiliar procedure of actually landing on a grass runway.

The PTS has only a few modifications from the normal takeoff and landing that must be reviewed to thoroughly understand the testing of this maneuver.  Depending on which certificate you are training for, the PTS criteria might differ slightly, but for the purposes of this article, we will use the Private Pilot PTS.

If you have already mastered the Normal Takeoff, then the Soft Field takeoff is remarkably similar.  The procedure is so similar that the PTS only has three criteria that are different between the two types of takeoffs.  The first difference is to “…align the airplane without stopping while advancing the throttle smoothly to takeoff power.” Most students know this as their instructor telling them “you’re not allowed to stop on the runway and minimal braking for turns.”  This minor change rarely gives students any issues during their performance except of course if they forget that this is part of the procedure.

Second, the PTS states that the student will “establish and maintain a pitch attitude that will transfer weight of the airplane from the wheels to the wings…”  This is the first procedure that makes a noticeable difference for the student.  Simply put, you are required to maintain back pressure to use the elevator to lift the weight off of the nose wheel.  Some students will misinterpret this as needing to “pop a wheelie,” and although that does meet the requirement of the PTS, it can also lower forward visibility to the point of creating a dangerous collision avoidance problem.  All you need to do is get the nose wheel up enough to “get it out of the grass.”  This will allow the aircraft to accelerate faster and will set us up for the next item in the PTS.

Third, the student will “rotate and lift off at the lowest possible airspeed and remain in ground effect while accelerating to Vx or Vy as appropriate”.  Since in the previous PTS item we already have the nose pitched up to remove weight off the nose, the first half of this requirement, lifting off, will naturally be accomplished.  No work there.

The second part of remaining in ground effect is often the most difficult for students – and nerve racking.  The technique is simple to describe, but often hard to convince yourself to do.  Once the aircraft lifts off, (often well below normal Vr) you need to push the nose over to continue to accelerate to Vx or Vy while remaining in ground effect to limit the possibility of a stall or remaining on the back side of the power curve.  The difficult part is convincing your mind that pushing over on the yoke/stick is a good idea.  Don’t Panic!  Keep your eyes near the end of the runway and look for the sight picture you use for flare.  It is the same.  Your mind already knows the picture so just trust yourself to use that same image.

Ok, so three differences were enough for you; how about only 2 differences for the landing.  Sound easy?  It is!  The first difference on landing is the most obvious – soft.  The PTS states only a small difference in wording from a normal landing when it states “Touches down softly with no drift, and …” The rest of the quote is the same for a normal landing so the only difference is the word “Softly.”  Actually, the soft field landing removed the requirement of touching down on a specific spot within 400’, so this type of landing is easier from that point of view.  I think everyone would agree that all landings are desired to be soft, so this really isn’t a big difference.

The second difference is almost equally as minor; “maintains proper position of the flight controls and sufficient speed to taxi on the soft surface”.  Although this point sounds a little vague, what the FAA is asking for is the reverse of the takeoff procedure with use of the elevator and brakes.  We want to keep the weight and pressure off of the nose wheel following touch down and use minimal to no braking to prevent the aircraft getting stuck in the soft surface.  Now be careful, don’t abruptly pull back on the elevator immediately following touch down or you might lift off again, or pull the nose high enough to prevent seeing out the window.  Both are undesirable.

That’s it!  These procedures are NOT that different from normal landings.  Now for those of you reading this asking yourself where did all of the “other stuff” go?  Didn’t you leave something out?  My instructor taught me lots of other things about these types of landings.  You are correct.  There are many different techniques that are incorporated into these two maneuvers to get the desired results.  Instructors often have techniques about how to make your touchdowns soft.  That is the item that most students remember that stands out about the few differences between these procedures.

Now that you have the basics of the maneuvers down, now it is time to give them meaning.  If you are like most students in flight training, you are training on a hard surface runway and have only practiced Soft Field techniques on pavement.  The issue with simulating a soft surface is you never get a chance to actually see what the technique does to performance.  If your flight school has restrictions placed on landing on soft fields, consider taking a singular lesson with a flight school that is based at a soft field or a nearby school that have aircraft and policies approved for operations on a grass runway.  Once you have the chance to actually go to a soft field, I think you will find it as much fun as I do.

Have fun during your training.