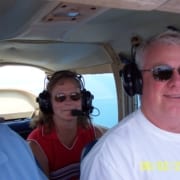 I have heard your call.

Wanted to sail upon your waters

Since I was three feet tall.

These words were penned by Jimmy Buffett 40 years ago in a song entitled “A Pirate Looks at 40” telling how a young boy longed for a life on the sea.  I grew up in land-locked Fleming County, Kentucky.  There was no local harbor with ships taking cargo and passengers to stir a young boy’s imagination, but there was the sky above.  Out in the hay and tobacco fields where I grew up I would stare at each passing airplane from the time I first heard it, until it would disappear in the distance.  For each one I wondered where they came from, where they were going, and what adventure awaited them over the horizon. I dutifully watched Sky King use his Cessna 310 named the Songbird every Saturday on TV battling the bad guys from his Flying Crown Ranch in Arizona.  Like Sky, I was raised on (and still live on) a farm, but I was born to fly.

My bride of 30 years and I have made several trips to the islands of the Bahamas.  We embarked on our “Millennium Tour” in 2000 where we started by flying to Memphis spending  time listening to the Blues on Beale Street before moving on to San Antonio to see the Alamo. We flew N44647 up over Oklahoma and stopped for fuel in Oakley, Kansas where the taxiway to the FBO takes you through a John Deere dealership.  We continued on up to Rapid City, South Dakota to see Mt. Rushmore where, even though it was June, we were greeted on the ramp by line personnel wearing insulated coveralls.  We had brought only summer clothing so we shivered in the 45 degree weather visiting with George, Thomas, Teddy and Abe.

From there we went to Mitchell, South Dakota and saw the Corn Palace (yes it is a place) and its crop art murals.  After visiting friends in Rochester, MN, our next leg took us to Meigs Field in Chicago to visit the museums just a short walk away.  This was three years before Chicago Mayor Richard Dailey committed the largest act of vandalism in our nation’s history by ordering the city’s bulldozers, on a Sunday night, to destroy the airport’s runway.  I have not spent one dollar in Chicago since that night even though I often have to fly to O’Hare airport (KORD) to transfer flights on the airlines.  I am sure the city misses my business.

The log books are filled with visits to large airports with acres of concrete to numerous grass strips and their acres of well – acres.  I have learned many lessons in the physics of flight.  I’ve gotten lucky more than a few times and discovered good judgment comes from experience but that experience, more often than not, comes from bad judgment.  I have learned the most valuable things in a pilot’s bag of tricks are airspeed and altitude, while take offs are optional, landings are mandatory and if you think you might need fuel – you probably do.  Bob Hoover tells us all to fly the airplane as far into the accident as possible and you might be surprised how well things work out.  Benny Mallory taught me that if I had 70% of my takeoff speed half way down a grass runway I would likely clear the fence posts at the end.  If I did not?  I should probably use that last half of the runway for stopping.

I now know the only place you have to be is where you are and that no matter where you are stranded you will likely find a friendly pilot, who has been stranded themselves and needed a friendly pilot; and that I should be that friendly pilot when I find a stranded pilot.  I have learned to make funnels from old oil containers and to ALWAYS double check the master switch before walking away from an airplane.  I now understand when flying into a busy, non-towered airport yielding the right of way may make more sense than taking it.  And just because the FBO is supposed to be open at 4PM on a Sunday afternoon, it is best to call ahead and confirm.

Your goal may be to fly for the airlines.  You want to get in the left seat of something with a hand full of throttles and fly that blazingly fast aluminum tube full of strangers to their destinations and if so, I doubt you will find much useful in my flying experiences.  But if you are a kid – in the middle of a field – looking up – wondering where that little airplane is going – where have its passengers been and what adventure awaits them – just know that one day you can be that pilot.  Your pilot’s license is worth the considerable time, effort and money it takes to earn.  Mine is.