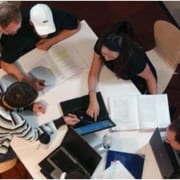 Flying clubs come in many shapes and sizes. What they have in common is a group of members interested in flying and in saving money on their flying activities.

Flying clubs are traditionally a member run organization formed to spread the costs of aircraft ownership among the members. Most clubs only exist for the stated benefits to the members, not for earning a profit through aircraft rental. They are considered a more economical alternative to owning an aircraft and a more convenient alternative than renting.

As a club, there are often social aspects of belonging that you do not get through aircraft ownership or rental. I’ve heard about some clubs in our area that have dues paying members who no longer fly but remain active in the community which the club has developed. These older pilots provide mentorship and encouragement to the younger pilots and are a welcome base to the club.

Flying clubs can have a wide variety of aircraft. Many have the same basic training aircraft that you can find at your local FBO but some have higher performance aircraft available as well.

A popular type of club in the United States is the glider club. A quick look at the Soaring Society of America’s (SSA) “Where to Fly” application shows 5 places to fly a glider in the state of Ohio, 4 of those locations are clubs. Sporty’s Academy is the sole commercial glider operation listed for Ohio. For the United States as a whole, there are 50 commercial glider operators compared to 137 glider clubs. For US glider operations, the flying club is certainly the predominant model. The SSA supports glider clubs through their Clubs and Chapters division.

The Aircraft Owners and Pilots Association (AOPA) has a number of resources for flying clubs available on their website including their guide to starting a flying club and their Flying Club Finder if you are interested in finding an existing club. Their page also has a link to a Facebook group dedicated to the AOPA Flying Club Network.

Flying clubs have an opportunity to earn rebates for their club when members shop at Sporty’s Pilot Shop. The Flying Club Rebate Program is one of the newer ways that Sporty’s gives back to the aviation community. It is free to the club and its members and is easy to get signed up and use.

Sporty’s Academy recently introduced their own brand of flying club with a little different twist from the usual flying club.  This program allows members priority access and exclusive benefits on the Academy’s G1000 equipped rental aircraft at very attractive dry rental rates. The Sporty’s Flying Club includes the social aspect of other clubs but with fewer headaches and professional management.

So if you are looking for a more affordable option for your flying or flight training, check out the clubs in your area. You’ll be glad that you did.