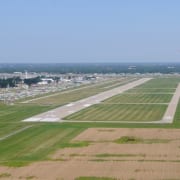 For most pilots, flying into AirVenture Oshkosh (KOSH) is very near the top of their bucket list. As a pilot, there is just something amazing about following a railroad track and being asked by a controller to “rock your wings” while on your way to the largest gathering of general aviation enthusiasts in existence. To the non-aviator, talking about a flight of this magnitude doesn’t resonate the same as when talking to fellow pilots who dream of this event. We get to be a part of this exclusive club that understands the Oshkosh initiation when flying to the aviation Mecca.

I’ve been part of the Sporty’s team for more than 12 years and have been attending AirVenture Oshkosh for most of those years. Normally my assignment is slightly less glamorous as I’d typically be driving a company vehicle pulling a trailer full of pilot supplies, but not this year. The planets must have aligned perfectly as I was the lucky pilot chosen to fly the brand new Sporty’s RV12 sweepstakes airplane to Oshkosh. Flying to Oshkosh, and more specifically, the VFR arrival has always been on my bucket list and now I get to check it off, and what’s more, in an RV12!

Planning for the flight was both easy and exciting. EAA publishes the Notice to Airman (NOTAM) well in advance so overly excited pilots can start dreaming weeks ahead of the big day and digesting all of the fine details. I’m pretty sure I can still recite every frequency, even the ones I had no chance at being assigned. Firing up ForeFlight on my iPad, I plugged in a direct route and started adjusting the course line to best fit the needs of the RV and its pilot.

Sporty’s is located at the Clermont County Airport (I69), just east of Cincinnati Ohio. A direct line to KOSH put me right in the middle of Lake Michigan. I can swim fairly well, but didn’t want to have to demonstrate that ability on this flight in the unlikely event of trouble. But honestly, who can pass up the opportunity to fly up the gorgeous Chicago lakefront and have a glimpse of the former home of Meigs field.

The total flight was planned to be approximately 4.5 hours. The RV will hold around 5 hours of fuel. Arriving anywhere with less than an hour of fuel reserve is a felony in my book, so a fuel stop is a must. Besides, the thought of a man my size trying to use a travel john in a tight cockpit like the RV had me convinced that I might even need two stops.

With the plan in place, all I had left to do was dream about my big flight for the next few weeks. Like a 4 year old waiting for Christmas morning, I couldn’t hardly sleep ahead of the big day.

The RV12 is an LSA so it’s small, light and approved for VFR flying only. The weatherman was not on my side that day as a front was moving through the region. Weather began to move in as I approached the Chicago area, but I was equipped with ADS-B weather and had a good picture of what was ahead. A shower roughly the size of the Class B airspace in Chicago was preventing me from taking the scenic route up the lake shore.

A few adjustments to the route and a stop had me waiting out the worst of the weather southwest of Chicago in Dekalb. By chance, a B-17 was giving rides that day. While I didn’t have the time to get in line, it sure was an entertaining way to wait out the weather delay.

As the front passed, I made a run for KOSH and it looked like everyone and their brother had the same idea. Again, the ADS-B proved invaluable providing traffic avoidance approaching the Oshkosh area via my iPad connected to a Stratus ADS-B receiver.

30 miles from RIPON, all traffic disappeared. Not because they landed, but because the NOTAM required transponders be turned off. [I often wonder if that requirement should be removed with our new found traffic capabilities.] Flying over the town of Ripon, I merge into a line of aircraft following the railroad track to FISKE. Few words can describe the sight of more than a dozen small airplanes in line for a VFR arrival to the “world’s largest airshow.”

When the controller came across the frequency asking that the “blue low wing following the ‘amphib’, rock your wings,” you can bet I gave a wiggle that might have required wearing a parachute. “Nice wing rock. Follow the ‘amphib’ for 36 left.” A compliment from an Oshkosh controller? If I could have done a back flip inside the cockpit, I would have.

Switching over to the tower frequency, I received the final clearance I had so eagerly anticipated – “cleared to land, 36 left, yellow dot, welcome to Oshkosh.” I made sure to leave my mark right in the center of that dot as one of my most memorable flights came to an end.