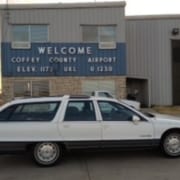 It was my first real trip as a licensed pilot, flying a Cessna 172 from Cincinnati to Toledo, Ohio to meet my fiancee (now wife) and her parents for the weekend. I was thrilled to make use of my new certificate on a “mission,” not just touch and gos. I was also excited to show my in-laws how powerful this whole flying idea could be.

But after landing in Toledo, my emotions quickly went from pride to embarrassment. First, I couldn’t figure out how to put the sun shades in the airplane. Sounds simple, but I had never done it during flight training. When I landed after a lesson, another student was coming for the airplane so I just chocked it and walked away. This was new territory. After 15 minutes of experimenting with the sun shades in the 90 degree heat, I finally figured out the system and closed up the airplane.

As I walked into the FBO, I stumbled into another embarrassing moment. The nice lady behind the counter asked if I needed a crew car. “What’s a crew car?” I naively asked. “Am I crew?”

It was obvious–I knew how to fly a Cessna, but I had no idea how to travel by Cessna. I was like a football player who had been to all the practices and scrimmages, but never played in a real game.

My guess is a lot of new pilots are in the same situation.

As student pilots and newly-minted private pilots, we spend most of our time in the traffic pattern or the practice area. Even during cross countries, the goal is to make the trip, get a logbook stamp and head home. It’s all about the process, not enjoying the ride or the destination.

There’s nothing wrong with this approach during training. After all, the goal is to maximize your learning during the allotted time. But once you earn your license, it’s critical to throw off those shackles, get out and travel! It’s one of the most exciting and enjoyable things (maybe the most enjoyable thing) about being a pilot.

But as my trip to Toledo showed, it’s not as easy as you might think–especially if your flight school emphasized dead reckoning over real travel.

For a start, you need to learn some very practical skills. If you’re flying to Chicago (or Atlanta or Dallas or Los Angeles), you have more than a half dozen airports from which to choose. Picking the right one is an art, and it takes practice. Which one is closest to your destination, which has the right facilities, what’s the difference in fuel price? These are all basic but important questions you need to consider when planning a trip.

Once you’ve chosen an airport, you may need to select an FBO and arrange for parking, fuel, rental car or other logistics. It’s not hard, but it’s something you probably didn’t learn in ground school. For example, most FBOs have discounted rates with area hotels or rental car companies–but you have to ask.

There are more serious lessons to learn, too. If you’ve only flown within 100 miles of your home airport, you probably aren’t familiar with different terrain, weather and ATC features. Learning to fly in Ohio, I remember feeling really uncomfortable the first time I flew in the mountains. For one, there were rocks to miss, but the weather patterns were also quite different and ATC radar didn’t go down to the ground.

Longer trips also expose you to changing weather, which I’ve found pushes me to be a better pilot. Here’s an example: if it’s windy at home, you read the METAR and cancel your flight. But if you’re 2 hours into a cross country and your destination airport starts reporting gusty winds, you can’t just cancel. Or maybe you flew in yesterday in clear skies, but the next morning you wake up to an overcast sky and fog.

You should never let weather back you into a corner and compromise safety (“get-home-itis” can kill), but learning to handle Mother Nature is one of the most valuable lessons you can learn. Sometimes you’ll have to cut your plans short to beat the weather home, sometimes you’ll have to spend an extra night in that hotel waiting for better weather. Learning to say no or to be flexible is all part of learning to travel by airplane.

Studies have shown that the process of planning and anticipating a trip can often be as enjoyable as the actual event. That study obviously didn’t include pilots, because nothing beats the flight, but the point is still valid. Don’t rush the planning phase. Take the time to learn all the variables, consider the options and make a thoughtful decision. You’ll have more fun before and during the trip, and you’ll learn just how rewarding it is to fly yourself somewhere.