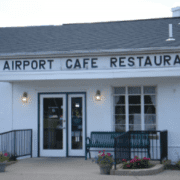 Flight school, albeit fun, can be a real drag. I can recall fretting over the next “turns around a point” lesson for the fourth time.  Don’t get me wrong, any chance you have to get in the air and burn some 100LL is a great day, but looking at the upcoming lesson outline would often have me praying for a rain out.

The cure for my boring outlook on the next lesson came one day from my instructor who also wasn’t thrilled about having to teach the same lesson to four students on the same day. He introduced me to the marvel of the airport cafe.

Upon my arrival at the airport, my instructor commented “you want to do lunch?”  My first thought was that he was asking me on a date.  “You’re really not my type, but I could go for some fast food before we head up.”  Little did I know, lunch was actually going to take place as part of the flight lesson.

Scheduling a three hour flight block, we took off with the intent of doing some basic maneuvers. Heading out to the practice area, we started on the boring stuff: turns around a point, turn to heading, climbs, descents, etc.  Leveling off after ten minutes of doing what seemed to be random maneuvers, he asked me where we were.  As basic as that may sound, I wasn’t exactly prepared to answer at this point.

Looking out the window, I didn’t see anything that looked familiar.  And my instructor’s grin indicated that I was on my own to figure it out.  Dialing up the ADF (starting to show my age), I turned to a heading that would take us back at our home airport.  He promptly put an “Inop” sticker over the indicator and told my to try again using the visual landmarks around us.

Admittedly frustrated, I reluctantly consulted the chart.  I found the one airport not too far from home base next to a large river and concluded that we’ve wandered over near Middletown Ohio (MWO).  After locating the appropriate frequency, we made a position report.  I barely released the PTT switch when my instructor pulled his favorite lever: the throttle.  “There goes your engine.  Now what?”

Best glide, turn towards the field, verify wind direction, make a plan, communicate…not bad for a newbie.  It wasn’t my best landing and I ended up using 3800 of the 4000 feet available, but we got it down.

“Taxi over behind that old row of hangars.”  Now I’m confused, but he definitely knows something I don’t.  After shutting down the engine, I notice a gate in the fence and a Frisch’s Big Boy restaurant on the other side. That’s when it hit me that we had a fly-out lunch.  There was nothing special about this particular greasy spoon, and if you were in a car, you probably wouldn’t even consider stopping.  But traveling there by airplane made it special and we accomplished a host of valuable learning experiences in the process.

To this day, my favorite flying missions are food related.  I’ve become a biscuits and gravy connoisseur at airport diners and an expert on blueberry pancakes.  And it was all because I had a creative flight instructor who may have sensed that I needed something a little different to maintain my motivation.

So my challenge to students and CFIs is to be creative.  There’s a lot that can be accomplished in the course of a fun flight to have lunch.