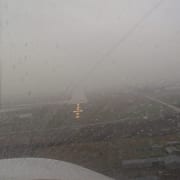 I always have a plan B. Typically, when flying, I also prefer to have a plan C and D in case of an emergency or if things don’t go according to plan. This could mean simply taking into account nearby airports along your route in case of emergency, filing an alternate when flying IFR (even if the regulations don’t require it), or any other contingency whether major or insignificant.  My point is to always have an “out” when flying.

Having an out is more important, and harder to come by, when your flight involves weather. For example, en route or destination thunderstorms, icing or high winds all demand fuel planning, alternate airport examining, terrain consideration, and possibly a review of holding procedures. If, in some cases, a plan B is not available, consider flying on another day.

More than 10 years ago when I was a brand new instrument flight instructor, I was asked by a friend to help him fly a 172 from Madison, WI (KMSN) to its new owner in Shreveport, Louisiana (KDTN).  My friend was a commercial, instrument rated pilot who worked as a ramp controller for a local airline. On the side, he made money and built flight time all around the country flying any recently purchased aircraft to its new owners.

The flight he asked me to accompany him on was forecast to include low IFR conditions (less than 1,000 feet ceilings and 1 mile visibility). He was current to fly IFR but felt more comfortable having me there to share the workload.  And he offered to split the money he would make. I was excited to build flight time, especially some actual IFR, and to make some extra money. Because he worked for an airline, we were able to fly standby that night to KMSN.

We woke early the next morning to a thick fog – worse than forecast. The cab brought us to the airport. We inspected the airplane, the documents, and the maintenance records while waiting for the weather to improve. We loaded our bags on the airplane. Everything was unfolding as expected except for the weather. It was worse than forecast for the entire route offering limited legal alternate airports to file (FAR’s require 600 foot ceilings and 2sm visibility for an airport with a precision approach).

We were able to find a fuel stop at the halfway point with an alternate nearby, both of which had precision approaches. The same was possible for our destination. So far, we were legal to fly. But just because it’s legal doesn’t mean it is smart. Most of our route had ceilings less than 400 feet and less than 2sm visibility, and the tops of the clouds were above flight level 180. We delayed the departure hoping the weather would improve, which it did not. It was time to make a decision.

I had been playing out scenarios in my head. Engine failure/fire in IFR conditions, although unlikely, should be considered and discussed with your instructor. I thought about electric fire/failure, and how that would affect our flight. The maintenance records showed no problems with the airplane and I even spoke with the mechanic about any aircraft squawks.

After examining the weather depiction chart, my biggest concern was that from the minute we took off from KMSN, we could not make it to VFR conditions in any direction for the entire day’s forecast. If we lost our electrical system, we had no communication, no GPS, no VOR, no NDB, no backup GPS, and no hand held radio. We had only our pitot static and vacuum systems, which offer an altimeter for altitude and heading indicator for heading. If you lost your electric system, your plan B would be to get to VFR conditions and find an airport to land. We were facing IFR conditions along our entire route without a backup Nav/Comm to navigate.  We had no “out” in an emergency.

Chances are we would be fine. Everything would probably work well, but I still didn’t feel comfortable. I told my friend what I thought and he agreed. After waiting until noon to begin the flight, we decided to call the new owner to tell him we weren’t coming. The new owner was not happy. He was a pilot and had been checking the weather as well and didn’t understand why we wouldn’t go.

The airline flight back to Cincinnati proved the weather was in fact true to the forecast for all of the Midwest. The Regional Jet carried us through solid IFR. We only saw the ground for a couple minutes; the first few hundred feet after takeoff, and the last few hundred feet before touchdown. But deep down I still felt like maybe I was too cautious – that I missed out on a great flying experience and that we disappointed the airplane owner.

A few days later, my friend called me to tell me he flew that 172 to KDTN. He flew it down on a beautiful day with no clouds and unlimited visibility. Yet the tone of his voice said there was more to the story. “But I lost my alternator shortly after departing KMSN,” he said. I was shocked!

What if we had flown on that IFR day? An alternator failure isn’t a total electric failure. But the best we could have done is declare an emergency, ask ATC for a heading to the nearest airport with a precision approach. Then turn off our master switch until the time when we expected to arrive. After turning the master switch back on, we may have had enough electric power left in our battery for an attempt at a precision approach to land. But thankfully, we had avoided that nightmare scenario.

Flying in IFR conditions, when rated to do so, is the best way to build your experience and stay proficient. If you’re flying as single pilot, I strongly suggest doing so with an autopilot you know how to use well. Every time you fly you will need to plan for many different potential scenarios. After that sobering experience, I always take time to study the weather depiction chart to determine the best direction for VFR conditions in case of an electric failure.

While this is just one consideration for one scenario, for your own safety, always have an “out.”