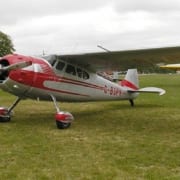 This week I will celebrate the 29th anniversary of my 29th birthday.  Birthdays, which are so anticipated when you’re young.

The birthdays just become numbers after you get to be middle aged.  I am starting to qualify for some senior discounts so that is a plus, but now birthdays become a time to look back and reflect on a blessed life.  I had strict but loving parents.  I am married to the most beautiful girl (both outside and inside) in the world and I go to work at an airport.  So I have decided to use this space to look back at the 6 decades through which I have lived and reveal what I believe to be the major advancement in general aviation for each one.

1950’s – The Nose Wheel.  The decade of my birth saw wide fleet-wide adoption of aircraft with the third wheel under the nose instead of the tail. The first 5 decades of aviation was dominated by so called “conventional gear” or tail-wheel aircraft.  Visit the “legacy” aircraft flight line at any big air show and you will see rows of Cubs, C-195s, Stearmans, Staggerwings, and Electras.  Early airports (like Bowman Field (KLOU) in Louisville, the oldest continually operating airport) were little more than big flat spots where general aviation airplanes could always land into the wind.  Their nose high attitude on the ground kept the propeller safely clear of the uneven turf.

With the advent of heavier aircraft the turf was replaced with pavement.  By moving the mains aft and propping up the nose of the airplane manufacturers discovered on ground visibility improved and there was a marked reduction in ground loops during those perilous moments between touchdown and chocks.  I guess this trend toward metal nose wheel airplanes started in the 1940s with the Bonanza, but I contend it was the 50’s when the Pacer became the Tri-Pacer and the 170 became the 172 marking the domination of nose wheels we still see today.

1960’s – “That’s one small step for man, one giant leap for mankind.”  What did President Kennedy’s declaration vowing to “Before this decade is through, we will put a man on the Moon and return him safely to Earth” have to do with general aviation?  Well, for one thing, it inspired a generation of pilots (including this one) to get excited about all things aeronautical.  But more importantly technology needed to get smaller and lighter if they were going to reach escape velocity.  Tubes were replaced by transistors which were replaced by silicon chips.  Power requirements were reduced and computing power increased.  All these innovations were forerunners leading to modern avionics, smart phones and iPads upon which we rely today.  A guy named Hal Shevers started selling portable aviation radios out of the trunk of his Studebaker, a business that gave birth to Sporty’s Pilot Shop.

1970’s – Expansion of the aviation infrastructure.  During this decade, the number and quality of airports dramatically increased.  Rural communities came to understand that economic development would come on an airplane, not a Greyhound bus.  Corn fields became airports.  Piper, Cessna and Beechcraft were producing tens of thousands of airplanes a year. As a testament to industrial efficiency, those airplanes were all made of aluminum and had engines built by Lycoming or Continental with mechanically tuned radios mostly from King or Narco. Almost every FBO was a dealer for one of the manufacturers and thousands of us were learning to fly.  It is the decade in which I first flew an airplane opening the door to many adventures.

1980s – The birth of the internet. While not fully developed as the World Wide Web, computers were being linked and email became possible.  Prior to this technology, teletypes and fax machines were the way electronic documents moved.  Indeed the numerous Flight Service Stations (FSS) relied on these technologies for the surface observations, forecasts and radar maps they provided to pilots of the era.  To get a weather briefing, a pilot would either call or visit in person one of the several dozen FSS facilities.  Many had local radar, but for cross country planning, the information we received may well have been over an hour old.

Nowadays, we take out our phone, open an app and receive near real time information on weather and NOTAMS from across the country – courtesy of the internet.

1990s – You are here.  Sure, transoceanic airliners and high end corporate jets had inertial guidance and LORAN systems for navigation, but for most of us, navigation and situational awareness was divined by some combination of pilotage, dead reckoning and aligning needles from VORs and ADFs.  A competent pilot knew where they were in general, but often, his last known position was the approach end of their departure runway.  In 1989 the Global Positioning Satellite (GPS) constellation became operational.  The 1990s saw first the introduction of hand held GPS devices into the general aviation cockpits.  These incredible little boxes were both accurate and affordable providing both a course line and accurate positioning along it.  We marveled at being able to know where we were – exactly.  So accurate and reliable pilots would remark, “If it says you are here and you don’t think so, you are wrong!”  In 1998 Garmin introduced its GNS-430 Com Navigator relegating the need to align needles to determine a fix to the dust bin of Instrument Flight Rules history.

2000s – The information age hits the cockpit.  Avidyne introduces its “glass” displays in the cockpit of Cirrus aircraft.  Garmin soon follows with the G1000 in Cessna and Diamond airplanes.  Soon the 10 – 17 inch “monitors” are in every new aircraft save some special utility and sport aircraft such as Huskies, Maules and Citabrias.  Pilots could literally fly coast to coast and never take a chart out of their flight cases.  All the terrain, airways, and airports are graphically presented on Multi-Function Displays (MFDs).  Airport information, right down to the phone numbers of the nearest hotels were all stored in the avionics.  Early in the decade, Bendix King launched its ground based Flight Information System (FIS) providing near real time weather in the cockpit.  Traffic Avoidance Systems (TAS) from King, Ryan and Goodrich became more affordable and prevalent.  XM Satellite Radio teamed with WXWorks to stream satellite based weather into the cockpit (along with a couple hundred audio stations). Not having the line of sight limitations of the ground based system those FIS stations were eventually abandoned.  This technological revolution so greatly increased situational awareness we all assumed those Controlled Flight Into Terrain (CFIT) and continued VFR into IMC accidents would be eliminated.  Unfortunately, it seems pilots are destined to fly into rocks and weather for which they are unprepared.

20 teens – So far it’s the iPad.  Only two years old, this decade has seen the nearly ubiquitous acceptance of tablet computers (and their accessories) by pilots.  Everything from flight planning, performance planning, weight and balance, cross country navigation, to logging the flight can all be performed on these 10 inch wonders.  GPS/ADS-B receivers like the Stratus provide in-cockpit weather and situational awareness for Champs, Gulfstreams and everything in between.

Powered flight is 109 years old.  I have been around to see more than half of that.  After reflecting on the past, I like to ponder the future and wonder what the next six decades will bring. I offer the following predictions.

The rest of the teens – New engines, new fuels.  I predict leaded gasoline will be banned in California.  This will lead to the development of new fuels and engines to use them.  Cessna introduced its Compression Engine, Jet A burning Skylane at AirVenture this year.  Pipistrel has an airframe that will tolerate alcohol in its gasoline. Propellers will become more efficient with new designs and materials allowing us to squeeze more knots from each gallon of whatever we are burning.

2020s – Next Gen goes fully operational.  ADS-B in/out technology will allow us to not only know precisely where we are, but where all the other airplanes are around us.  ATC can make better use of available runways and offer altitude and speed advisories that will eliminate the need to ever hold at a fix. Unmanned Aerial Systems (UAS) will share the skies with those of us who still desire to fly.  Airliners are certified single pilot eliminating the predicted pilot shortage.

2030s – Advances in materials allow airplanes to “morph”.  As airplanes have gotten bigger and faster, so has the runway required for them to safely take off and land.  My prediction here is that airplanes will not only be able to configure gear and flaps, but the wings and control surfaces themselves, small and thin for high speed cruise – large and thick for slow take offs and landings allowing the largest airliner to operate out of runways less than a mile long.

2040s – Autonomous piloting of both airlines and private airplanes.  Aircraft manufacturers are able to eliminate the part that fails the most often.  The pilot.