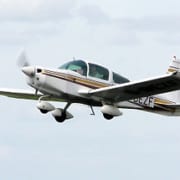 A few years ago, at one of the local airports, there was an aircraft accident. Two guys took off in their Grumman Tiger on a beautiful, summer afternoon. The sun was shining and the winds were calm. They lifted off, barely clearing the fence at the end of the 3,700 foot runway. The pilot then realized they wouldn’t clear the trees.  One was standing about 60 feet tall, another 1,500 feet off the end of the runway.

The pilot decided to land in the field underneath him. After quickly reducing the power to idle, he put the plane on the ground. The plane was out of control.  He struck a wing and flipped upside down. The pilots struggled to open the canopy before the plane would catch fire. The good news is they escaped with minor injuries. They were lucky though; it could have ended much worse.

After the accident, the pilot stated he didn’t understand what was wrong with the airplane. Was it an engine problem? Why did it take so much runway to lift off the ground? Why couldn’t they clear the trees way off the end of the runway? He and his flying buddy had made successful takeoffs every flight in the months leading up to this accident.

But as I mentioned before, unfortunately, it was a beautiful, hot, early summer afternoon. The density altitude was relatively high (around 3,000 feet) and there was no wind to “help” the airplane off the ground. The aircraft was near max gross weight as they usually are. They didn’t understand the dramatic effect that the elevated density altitude would have on their takeoff distance. It also decreased their climb performance which is reflected in their inability to clear an obstacle. This lack of appreciation and understanding almost cost them their lives.

Even though the pilots had made this takeoff successfully in the fall, winter, and spring leading up to the accident, they did not account for that hot, 3000 foot density altitude day at max gross weight on an upsloping runway with no headwind to help them. This resulted in a much longer takeoff roll with decreased climb performance. They should have recognized the airplane wasn’t performing nearly to what it had for them on past flights and aborted the takeoff.

With summer right around the corner, it only takes a few minutes to check your performance calculations. See how the hotter temperatures affect your airplane’s performance in all phases of flight. Note that most operating handbooks base their takeoff and landing distances on shortfield technique. If you plan a normal takeoff roll, the numbers in the POH will not work. Also, try to plan your flights earlier in the day when you can take advantage of the cooler temperatures and better performance.