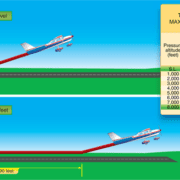 Pressure and Density Altitude calculations are key factors in determining performance but these can be confusing.  Also confusing is the FAA’s emphasis on precise calculations on the FAA knowledge test when these values are only a part of the total performance equation.  I’ll cover some of the other values in the equation in another blog post.  In this post, let’s take a look at Pressure and Density Altitude.

Density Altitude is used in computing the performance of an aircraft and its engines.  Some manufacturers utilize Pressure Altitude on their performance charts but they address the nonstandard temperature within the chart.  In this way, they are actually using Density Altitude but the pilot isn’t required to calculate it.

There are several ways that Pressure Altitude can be determined depending on the accuracy and precision required by the calculation.

FAA knowledge test supplements include a table on the “Density Altitude Chart” that shows a “Pressure Altitude Conversion Factor.”  The value obtained from this chart is based upon the altimeter setting and is added to the indicated altitude (the correction value will be negative when the altimeter setting is higher than 29.92″ Hg).  This correction value is precise to the nearest foot and provides a reasonably accurate measure of Pressure Altitude.

The Density Altitude value obtained from this chart has some minor accuracy issues when using the standard temperature line.  The lower anchor point of the standard temperature line is not set at 15° C for sea level as it should be.  This lower anchor is set at approximately 16° C.  This error in the chart should have less than 100 feet of error with regard to calculations.

There is a precise and rather involved formula for computing Pressure Altitude with exceptional accuracy.  It can be used to calculate the Pressure Altitude out to several decimal places if needed.  In general, aviation calculations involving POH values and used airplanes do not require this level of precision or accuracy.

If you are at an airplane, Pressure Altitude can be determined by setting 29.92 in the Kohlsman window and reading the altitude from the altimeter.

Many people calculate Pressure Altitude using the rule of thumb that 1″ Hg change equals 1000′ of altitude change.  This rule of thumb is accurate enough for most aviation calculations, as long as you know its limitations.  The rule assumes a linear change in pressure with altitude.  This assumption is not correct but the answer doesn’t stray far from the truth when the values being calculated are below 10,000′ MSL.  The rule, while easy to use, also has a minor inaccuracy as such that 1″ Hg change is not exactly 1000′ of altitude change but this issue should produce less than 100 feet of error per inch of change.

Why do we ignore humidity in common aviation calculations of Density Altitude?  Apparently, it was decided at some time in the past that it doesn’t make that big of difference with regard to the performance of the airplane for practical purposes.

This brings us back to why we compute Pressure Altitude and Density Altitude in the first place.  We want to know how the airplane is going to perform on a given day.

FAA test questions would have you believe that you should calculate your performance to the nearest foot.  As most experienced pilots will tell you, this is not grounded in reality.  POH performance numbers were developed with a brand new airplane being flown by a test pilot.  Do you want to bet your life on a calculation with no error margin in your 5 (or 25) year old airplane being flown by a newly minted Private pilot?

The truth is, you need a safety factor.

One way to build in a safety factor and ease your need to calculate performance to the nearest tenth of a foot is to always round the value.  Ignore the rounding rules that you learned in school and round to the next safest value.  For example, if your Density Altitude calculation tells you that the Density Altitude for the day will be 3213.65 feet, use 3300 feet or better yet 4000 feet when you go to your POH to calculate your takeoff and landing performance.

You may notice some minor difference in the output for Pressure and Density Altitude when you compare various charts and models of E6Bs.  This variation is likely due to the method that the manufacturer selected to compute these values.  These differences are generally not significant for practical purposes and should not be a concern.

For the less than practical FAA tests, these differences may mean that you won’t get the exact answer as the FAA.  Just use the closest answer and you should be fine.  Don’t become overly concerned about this minutia; there are other minutiae on the tests that should have your attention.

In the real world, you are better off rounding up to the next safest value.  This does away with things like interpolation on tabular data.  It is also a simpler and safer practice.

Keep it simple and stay safe!