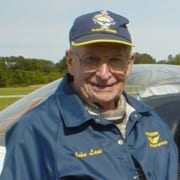 The room was crowded with hundreds of his family, friends, students, and business associates. It had been just over 3 weeks since many of us had lost our teacher, our mentor, our friend, to “complications” from a heart surgery. John Morgan Lane touched a lot of lives and we were all there to celebrate his life while mourning his passing.

I first met John Lane in the early 1990’s while a young flight instructor in the Dayton area. John was a designated pilot examiner and I had a student in need of a checkride. The examiner that I usually used wasn’t available so I planned to give John a try. I had heard about John prior to this and was bit intimidated. He had a scary reputation as an examiner according to the folks in my circles. I later learned that this “reputation” was very much a myth.

Our paths did not cross again until 2002 when Sporty’s contracted with him to teach me how to fly and instruct in the Diamond Xtreme motorglider that we had recently acquired. It was during that training that John became my mentor and someone that I was happy to call my friend. I rarely saw John without a smile and he always made you feel like he was glad to see you.

John’s legacy lives on through our motorglider training program and the many students who have learned to fly a glider through this program. When we first started, John did most of the rating examinations in the aircraft. He was the only examiner qualified at the time.

One of my first students in the motorglider was a staff instructor here at Sporty’s Academy. He later went on to become a pilot examiner in the aircraft and now works for the FAA. I believe that he is the only glider qualified operations inspector in the Cincinnati office. He is another tribute to the legacy of John Lane.

When the time came for Sporty’s Academy to produce its DVD on learning to fly a glider, we turned to John Lane for help. Many of the aero-tow segments in that program were flown by John in a glider from our friends at Red Stewart field. When we needed a slack rope shot, John made it happen. When we needed a glider in a spin, John was happy to oblige (while I sat in the other seat holding the camera steady). Rope break at 200 feet; sure, John could handle that. Those shots were the last time that John and I actually shared a cockpit but they were not the end of my learning from my mentor and friend. As I sit here writing this, I can’t help but long to fly with John just one more time.

John flew with a lot of people in his 29,000 plus hours of flying. A sampling of these people were in attendance at his memorial. When the pastor asked the question, “Who here has flown with John Lane?” a majority of the hands were raised. Many high time pilots acquire their hours while cruising on long legs, at high altitudes with the autopilot engaged. Not John, his hours were earned while teaching others to fly and sharing his passion for flight with anyone willing to go for a ride.

Stories of John’s generosity and passion abounded at his memorial. We learned that he not only gave an untold number of airplane rides to people at his own personal expense, he also gave of his time through the local Rotary and as a volunteer at a nearby retirement community.

John was not only a pilot and flight instructor, but also an aircraft mechanic. His hanger was a place where friends gathered to talk about and work on airplanes. Owners with an interest were often allowed to help John in his work on their aircraft. When other mechanics needed advice, John was always eager to help them out. According to one story, he would sometimes show up at your hangar door with just the part that you needed without being asked.

John lived near the edge of the Lebanon-Warren County airport with his wife Nelda. John’s hangar sat behind his home. Years ago, he donated the land to the county for the development of the airport. There is a movement underway to rename the airport in his honor. This would be a wonderful tribute to a man who gave so much to this facility and his community.

I can’t do justice to the memory and passion of a man like John Lane in this short blog post. There are simply too many stories to tell about a man who lived his life to the fullest.

As was expressed at his memorial, the passion and generosity of John Lane and people like him are what has made general aviation what it is today. Last month we lost more than a friend and a mentor, we lost one of the true advocates for aviation. We can only hope that several of us will rise up to fill parts of his role as I know of no one that can take his place.

John Lane, you will be missed.